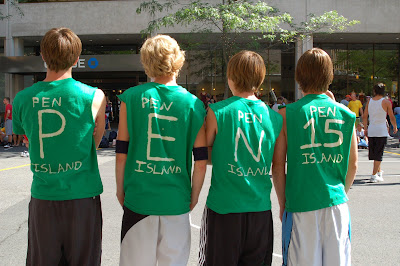 I took a break from installing new floor trim to watch four Mead High School cross country teammates, Josh included, play their second game at Hoopfest. They're a hoot to watch. They only shoot three-pointers (which are really two-pointers at Hoopfest). They don't intentionally foul. They don't call fouls. They have no attitude and ignore those who do. They lost this game 20-4 and had a ridiculously fun time doing so. In their first game the other team got upset because they paid good money to compete and Pen Island guys were playing soft instead of taking the game seriously.

Yeah, I couldn't resist getting at least one in.
Posted by Hank Greer at 6:28 AM

He explained that eventually they would lose a game and that the winners, when asked, would have to tell people that they beat Off In Church.