A Model Use Of Force

The elements of this offense are:

1. The defendant must have been acting under color of law.

2. The conduct of the defendant must have deprived the victim of some right secured or protected by the Constitution of the United States.

3. The defendant must have acted willfully, that is, with a specific intent to violate the protected constitutional right.

4. The offense must have resulted in bodily injury to the victim.

I think #3 will be key. From the few jury instructions I've found, the requisite "specific intent" is the intent to use more force than is necessary under the circumstances.

Based on what I read in the city's latest response to the civil lawsuit I think the use of force will be the main issue of the trial.

I reviewed the city's filing (PDF format). Included is a graphic image of the Spokane Police Department's Use of Force Model. 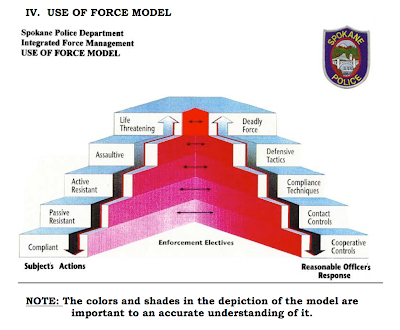 Officers should respond to the subject’s actions in order to gain compliance and control, based on training and continual risk assessment of the circumstances. Timing is an important element of the risk assessment process and is demonstrated by the officer's response to the actions of the subject, measured in terms of immediacy and necessity.

This is followed by a lengthy description of the model correlating a suspect's actions with the officer's response. Have a look at that.

Now let's review Officer Thompson's statement (PDF format) taken on March 22, 2006. It's pretty interesting. For one, there seem to be several leading questions on the part of the detective asking him questions.

One point that strikes me is his description of Zehm and the importance he places on the fact that Zehm is wearing a leather motorcycle-style jacket. He's concerned the jacket, as a form of soft armor, will protect the person from use of force by the officer. The jacket could also defeat the user of a taser. That's an interesting frame of mind to have. (Motorcycle riders should make note of this.) But at the end of the paragraph he does mention that the coat could conceal a weapon and the detective keys on that when he continues.

It's interesting to see all the backtracking so he can include things like his concern that cans and jars in the store could be used as possible weapons, his description of Otto Zehm's facial expressions, tone of voice, and body posture as Thompson felt threatened by the 2-liter bottle of pop. Did it never occur to him to back off a step and wait for another officer to arrive?

Based on the extreme physical resistance and uh efforts and the body size of the suspect was he was, he was stocky in his build. Urn, he had just undergone the same effort as I think I had only more so in his physical exhaustion uh in fighting and resisting and we've been trained to recognize the potential for what's called uh manic exhaustive syndrome. That especially if drugs are on board. It's also been my experience that this is applied as well to people who are experiencing a psychotic episode. Who, their body uh through whether it's through paranoia or delusions or hallucinations, uh their body undergoes such physical duress. Uh, in this case it was resisting and fighting and especially after he was handcuffed. Urn, that it puts a body into shock and uh maybe cardiac arrest or you know, something stops the person's heart. Uh, I mean I had seen, I had seen at least one situation 20 years before the title even came out of what this phenomena is that to be aware of. So yeah, several of us looked at it and said looks like the effects of Manic Exhaustive Syndrome here.

Nice recovery on the cardiac arrest clarification. Thompson brings up "manic exhaustive syndrome" which I can only find mentioned in deaths from the use of a taser. I can't find any studies, medical papers, etc., that describe it.

Aside from all the nitpicking I can do with his statement, I think it's important to focus on Thompson's use of force and see if it fits within the department's model.

That is going to be the key issue in this case.

*** Update ***
After looking at the Zip Trip video I can see one possible reason why Thompson is charged with making a false statement. In his statement he describes how he approached Otto Zehm and told him to drop the pop bottle. Zehm asked, "Why" and Thompson said he repeated the order twice as loud to which Zehm replied, "No". That would take a few seconds. In the video Thompson enters the store and quickly engages Zehm.

At the end of the day, the guy who didn't have a gun died. And it does seem that the officer is reaching for something, anything to legitimize his actions. Anyone who has watched "COPS" knows that sometimes little, naked people can be quite vicious. The whole thing makes me sad.