The National Oceanic and Atmospheric Administration just released report on the effects of climate change. 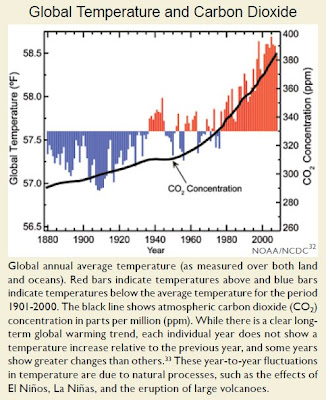 It's great they released this report but the PDF, which is great for printing, is overly large. It's a shame they don't have a more user-friendly HTML version.

While the primary focus of this report is on the impacts of climate change in the United States, it also deals with some of the actions society is already taking or can take to respond to the climate challenge. Responses to climate change fall into two broad categories. The first involves “mitigation” measures to reduce climate change by reducing emissions of heat-trapping gases and particles, or increasing removal of heat-trapping gases from the atmosphere. The second involves “adaptation” measures to improve our ability to cope with or avoid harmful impacts and take advantage of beneficial ones, now and in the future. Both of these are necessary elements of an effective response strategy.

* Global warming is unequivocal and primarily human-induced
* Climate changes are underway in the United States and are projected to grow
* Widespread climate-related impacts are occurring now and are expected to increase
* Climate change will stress water resources
* Crop and livestock production will be increasingly challenged
* Coastal areas are at increasing risk from sea-level rise and storm surge
* Risks to human health will increase
* Climate change will interact with many social and environmental stresses
* Thresholds will be crossed, leading to large changes in climate and ecosystems
* Future climate change and its impacts depend on choices made today

Compare it with the first national assessment.

And compare the 2000 assessment of the Pacific Northwest
with the latest report. 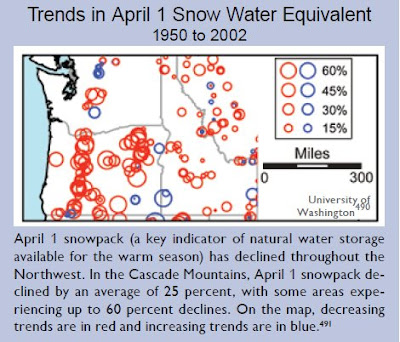 One striking difference is the loss of snowpack in the mountains. Oregon has really taken a hit on this.

No need to worry because according to those who are 'in the know':

As I said on the Senate floor on July 28, 2003, "much of the debate over global warming is predicated on fear, rather than science." I called the threat of catastrophic global warming the "greatest hoax ever perpetrated on the American people," a statement that, to put it mildly, was not viewed kindly by environmental extremists and their elitist organizations.
Posted by Hank Greer at 9:18 PM

"For these groups, the issue of catastrophic global warming is not just a favored fundraising tool. In truth, it's more fundamental than that." - Inhofe

Substitute "Gay Marriage" or "abortion" for "catastrophic global warming" and this goes the other way.