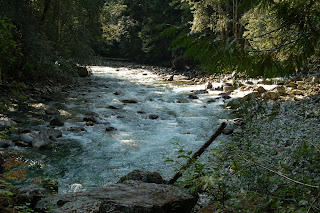 On Sunday morning John and I parked at the trailhead, got on the East Bank Trail and headed east to begin our loop. We followed Ruby Creek for a while and then started our climb. 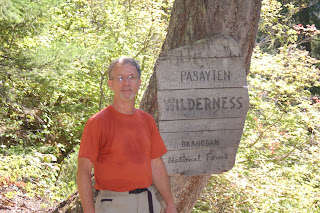 The weather was nice but when you're carrying 50 pounds on your back you tend to work up a sweat. Once we hit the Pasayten Wilderness we started in on the serious climbing. 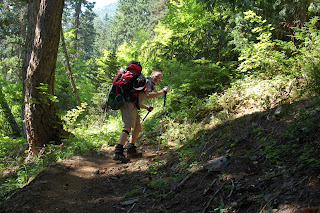 Switchback after switchback we slowly made our way up on our way to McMillan Park. I don't know if our memories of the Wonderland Trail trek just kept the good parts but both of us thought this trail was steeper. And for being in the wilderness we sure did cross paths with a lot of people. There must be some sort of bizarre trail etiquette that requires people coming down the trail to tell the people going up "it's not that far" or "you're almost there." A father-son team encouraged us to go to Devil's Park which is a couple miles past McMillan Park. They said it was much nicer there.

After slogging uphill for hours we came to the Crater Lake trail junction. A threesome there told us there was plenty of camping at McMillan Park (and we were almost there) and that there were already several campers there. Thankful that the worst of the climbing was over we pressed on. John had developed a problem with his ankle and it was getting pretty painful for him so we were eager to set up camp and rest. Intrepid scouts and backcountry experts that we were, we walked right by McMillan Park without realizing that was it. For one, we were expecting to see other people and we didn't see a single camp. We pressed on to Devil's Park and stopped at the first campsite we found. It was a 12-mile day. Fire was the first order of business. That's the way it is when you're camping. 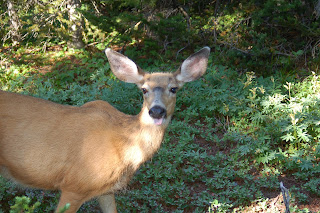 Of course, once you set up camp the deer start coming around and sticking their tongues at you for intruding on their habitat.

We ate dinner and burned most of our wood and crashed at 8:00 pm. We were tired with a capital T. I was out quickly and slept pretty good except for when John woke me to tell me I was snoring real loud. The night was cold and moisture built up on everything so we woke to a cold, damp start. But the ten hours of sleep felt good. Poor planning meant we didn't have any dry tinder to start a fire with so I used my Wind Pro stove to get some flames going. Worked like a charm. 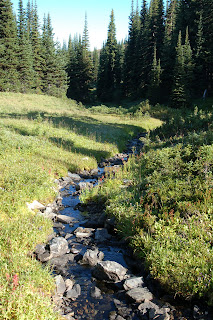 I got water from a nearby stream so we could hydrate some more dehydrated food. Once the sun reached us we could lay stuff out to dry. John tested his ankle out and thought it best not to continue. The remainder of the loop had more elevation change than our first day and we both thought it wise to head back.

Once we got everything dried out, we packed up and retraced our steps. It was easier going since we didn't have to climb much. But going down a steep trail is still pretty tough on the legs, even with the trek poles taking some of the load off. On the way down I counted the switchbacks from the top down to the Pasayten Wilderness sign and came up with 67. "Almost there" my ass. Don't even tell me that. 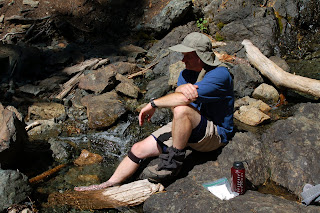 We stopped at one waterfall that crosses the trail and John iced his ankle. Fresh snow melt is the most refreshing drink ever, but make sure you get it upstream from the guy soaking his foot.

It's a shame we had to cut it short, but these things happen. We'll just have to try another trip next year.
Posted by Hank Greer at 8:14 AM

Holy smokes! 67 switchbacks? What a climb.

Well at least you've got the photo of that deer... that has to be worth something.

I don't know what's up with people telling you you're almost there. My husband did that for two miles on a half mile hike once. And yet we're still together, haha. Seriously though, I *do* tell the especially tired looking souls "you can do it" because I remember how much it helped when I was running a marathon. It might be a fine line, but I'm not crossing it all the same.

The fact that your trip was cut short matters so little. You guys obviously lived large.