What a great day for a run. Cool and sunny with a slight breeze. The weather couldn't have been better. Kathy, my wife of 31 years, my sister, Barb, and our friend, Sue, all signed up to be my support crew. Believe me, I am so thankful. To show my appreciation I had shirts made for them. 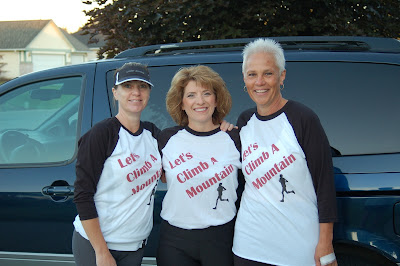 Barb, Kathy, and Sue.
To make sure everything runs smoothly, one of the first things you have to do with a crew is put someone in charge. 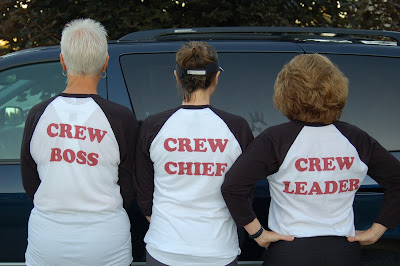 With that out of the way we headed out to Riverfront Park. The solo runners start time was 6:00 am. We showed up about fifteen minutes before and Curt Klinghorn of Runner's Soul briefed us on the course. We had some construction on Mission to look out for. Since the top of the mountain was still snowed in we had a turnaround point at the highest point we could reach followed by almost 2 miles of downhill to the finish at the snowmobile parking lot. 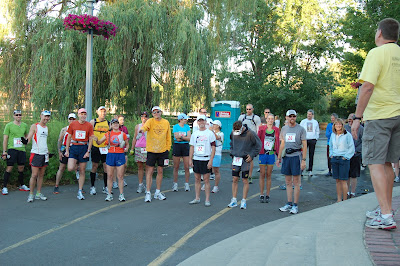 Group shot of the solo runners at the start.
Number 27 is the guy who won the race last year in 4:31:14. I called him Rocket Man because of the way he took off. After 10 seconds I never saw him again. A different part of that song applied to me.

And I think it's gonna be a long long time.

My concern about finishing was that I would start too fast and crash on the mountain. Essentially I was running a marathon and then following that with eight miles of steep climbing. So I asked my crew to keep tabs on my time and make sure I didn't go faster than a 10-minute mile pace.

They had no access to me for the first 3 miles. Twenty-four minutes.

Did I listen? I tried. I really tried. But I felt so good. On the bright side slowing down was much easier to do as the day progressed. 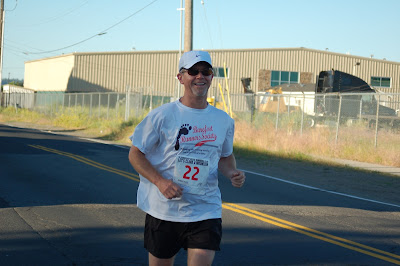 Feeling good at mile six.
After eight miles, I was only 5 minutes faster than I should've been so I was doing better. Kathy pulled back on the reins and made me walk with her for five minutes. Good for her. About that time the first of the team runners blew by me. They started at 6:30. Young and speedy high school and college runners barely had enough time to say, "Good job," as they zipped by me with seemingly little effort. Many more team runners passed me between the 10-mile mark in Mead and the transfer point at the 14-mile mark on Peone. When I reached that transfer point there was a very long line of people waiting to use the port-a-potty. They were all kind enough to let this solo runner cut in front of them.

Once I got to Mt Spokane Parkway, Kathy joined me in a run/walk until we got to Forker Road. Once there I washed my feet, applied a new coat of anti-chafing stick, and took a meal break. 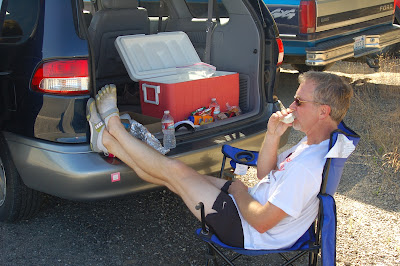 Chillin' for fifteen minutes.
Leaving the rest stop at Forker Road, I began the climb. One observation I kept making the rest of the way was that I didn't remember parts of the road being steeper than they were on last Saturday's run up the mountain. It just shows you what difference it makes when you already have 19 miles under your belt. 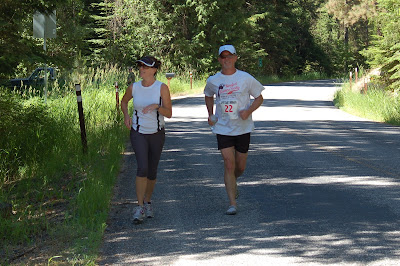 Here's where the crew made such a difference. Barb and Kathy took turns walking and running with me. Barb ran six miles and Kathy put in nine of mixed running/walking. It makes a huge difference when you're with someone instead of on your own. They were both awesome.

With about twelve miles to go I noticed a truck about 300 feet behind me. At first I didn't give it much thought but then as we were going up the mountain I realized I hadn't seen any other runners for a long time. And then it occurred to me.

Am I the last runner?

I had to know so I waved the truck up and asked the driver. 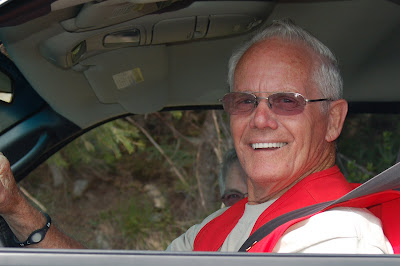 Yes, you are the last runner.
You know what that means. DFL is all mine! Yessssssssss.

Kathy walked/ran with me when we left the snowmobile parking lot. She was looking forward to hitting the turnaround point and running downhill to the finish with me. Sadly, it was not to be. We noticed we weren't seeing any of the other runners coming back down. And then we noticed they were coming down in cars. When we got to the turnaround point we found the gate to the summit was open. I asked the guy following me in the truck what was going on.

"Good news," he says with a happy smile. "There's a change of plans. We learned the rangers opened the road this morning. You get to run to the very top."

Well, it wouldn't count unless I did, right? 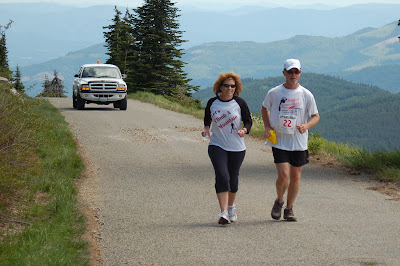 The last mile.
With a mile left to go, I switched from my Vibrams to some lightweight hiking shoes I brought just in case my feet got too sore. My feet were sore from walking. Running felt fine, but running wasn't happening because of a persistent cramp in my right calf. But once I switched to the shoes I could run. Go figure. Poor Kathy was struggling up that last mile. There's something about running uphill with less oxygen in the air than you're used to that adds to the difficulty. 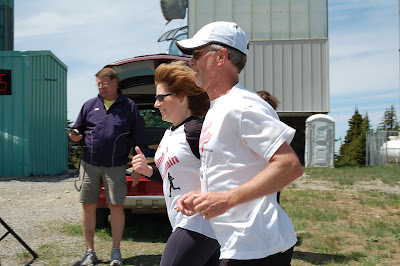 Curt captures my time as Kathy and I cross the finish together. I set a new PR of 7:15:15. 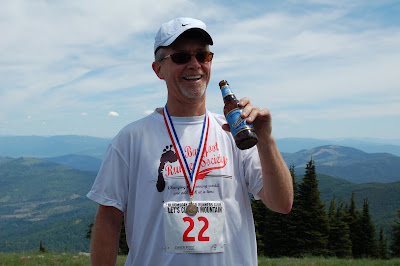 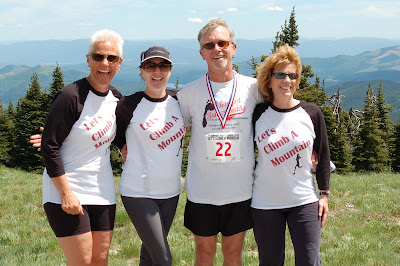 I owe a great debt of gratitude to Kathy, Barb, and Sue for crewing for me. I couldn't have done it without them.
Posted by Hank Greer at 5:01 PM

Congratulations Hank! You are awesome and I am so very impressed! Those last miles up the mountain are especially tough.

Congratulations Sweetie! You did awesome!!! Thirty-one years by your side and today was just another day for us to enjoy together. Love you ;) Kathy

You are amazing! Congratulations to you and your spiffy crew! So how might your favorite Auntie's help next year? We'll need plenty of time to get in shape.

Ditto, ditto on the above. auntjanet

Thank you much. Believe me, I had no trouble slowing down on those last 8 miles. :-)

Thank you for hanging in there with me. You made it a great day.

Thanks, but I won't be running solo next year. I've decided that 15 miles is my happy-fun-time running distance. Anything over that and the fun meter drops.

Congrats on your Ultra...nice of the Park Ranger to open it up for the true finish.

Awesome job to you and your crew. Someday I would like to be able to say "been there, done that". Maybe in the next couple of years I'll recruit you to be part of my crew?

Or I could run it with you.

Having a running partner would be even better.

See you next week at the Warrior Dash.

Wow, that's really impressive. Across the board. I remember how valuable it was to me when people were by my side, physically and/or emotionally, during my lone marathon.