First Race Of The Season

Just like last year we had a touch of rain early in the morning before the race at Riverside State Park. But not enough to keep the dust down. It looked like a pretty good turnout for all the races. The new men's masters 60+ group had seven racers. Lots of kids participated in the junior's race. And the Cat 4 men's race had a crowded start.

Michael Emde threw something different on the course this year. The tires between the barriers made the run through more fun and interesting. 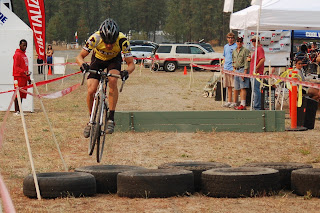 Of course, there's always at least one rider who apparently never learned how to dismount a bike. Amazingly, he bunny hopped both barriers and the tires on every lap. 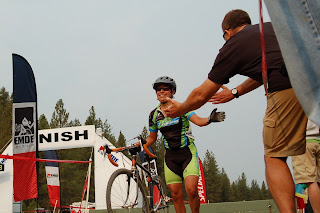 Fans high-fiving Stephanie for getting that last lap in. Nobody wants to get taken out by the race leader, right? 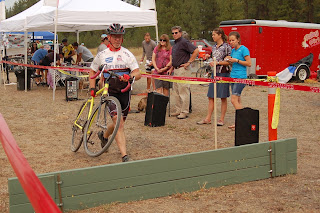 My race was great for the first half of the first lap until I hit a bump and heard a loud noise. I thought my rear tire popped but it turned out my fat butt knocked the saddle askew. 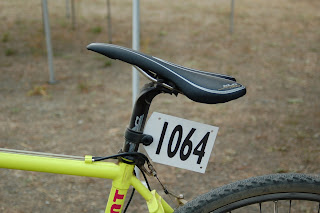 The next four and one-half laps were very uncomfortable at times. Having the forward part of that saddle hammering my underside forced me to stand on the pedals for the bumpy parts of the course, which was a lot of the course. 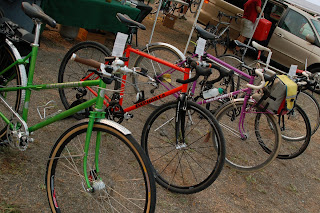 Glen was there showing off a stable of fine bicycles. There were a lot of Elephants on the course today. 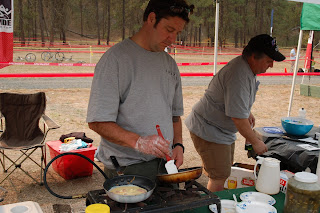 John was serving up omelettes which turned out to be delicious after a race. So delicious that I had three of them. And he threw in a beer, too. Thank you very much! I took a bunch of photos of the races today. John took some more while I was on the course. 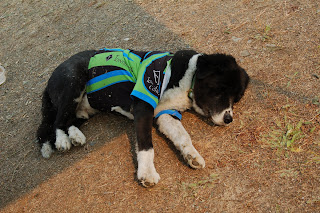 And now to rest after a fun-filled day.