Congrats to Spokane Rocket Velo and the huge number of volunteers who turned out to put on a race that Spokane should definitely host every year. I have no idea how much organization and work it took to get the permits, coordinate with the city, get and train volunteers, obtain mobile light units for the corners, tape off the roads, bag the parking meters, buy bales of hay, haul hay bales, put hay bales out, pick up hay bales--well, I think you get the idea. There's a lot to do for a downtown crit and they did it in spades.

I entered the Men's Cat 5 race. Councilman Jon Snyder was also an entrant. While waiting in the back of the pack for the start, I joked with Jon that the goal is to not get lapped. My friend, Steve, who has experience in these things told me I need to rethink my goal setting. He was right. The goal should be to not get lapped--four times. (Photos of me and Jon by John Speare with my camera.) 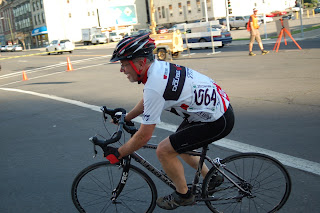 At one point late in the race, a motorcycle cop had his radar gun out. Kathy was nearby and asked what my speed was. 20 mph. Now normally I'm pretty happy to be doing 20 and I was probably doing 22-23 earlier, but mostly everyone else was doing 30. Hence I was lapped three times. There is nothing so humbling to a person who thinks they are a strong rider, and may be so in some circles, than to have their ass handed to them in a crit. I needed each and every alveoli to maintain my slowly degrading pace and I think some of them were being exposed to air for the first time. No podium dreams for this guy. 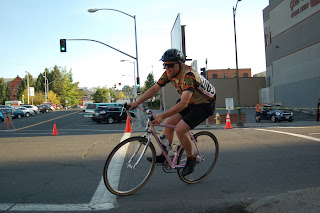 Jon Snyder bending through the corner. 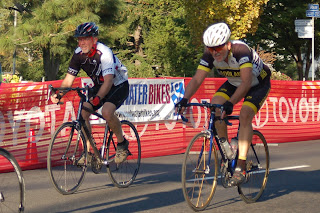 Crossing the finish line with Steve. 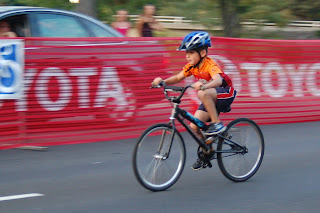 It was cool to see kids participating. They did a one-lap race and this six-year-old came in first, just ahead of his eight-year-old brother. Bam! Younger brother braggin' rights can claim that extra chicken leg at dinner time. 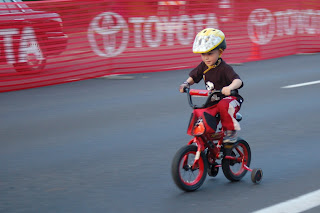 How many kids do you know would go all out for a lap on a bike like this? That's right. He's a future cycling bad ass. 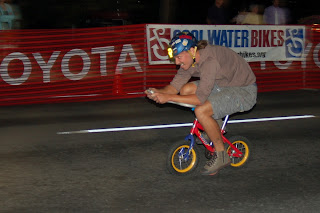 And how many adults do you know would go all out for a lap on a bike like this? It made the citizens ragtag rally much more interesting. 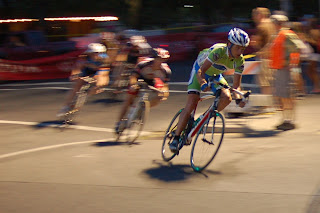 Watching the higher category men and women, I developed a new found respect for what they do. A televised race does not carry the same impact as being there in person. The whirr of the spokes cutting through the air as they go by is almost the only sound you hear from the pack. And while they go by in a flash, they are back real soon because they are without a doubt haulin' ass. 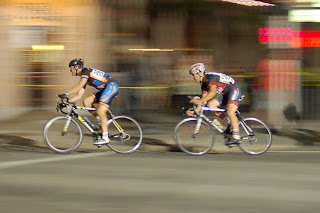 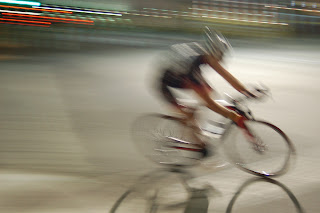 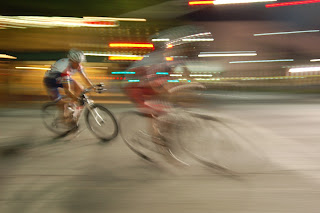 ...but you can get some cool looking images. I wish I could say I did them on purpose.
Posted by Hank Greer at 7:01 AM

Hank, I was one of the course marshalls at the next to last turn on the course (orange hat). It was good to see you out there cranking away.

Thank you very much for volunteering. And thank you for the words of encouragement every time I cruised by.

Good job on the crit Hank. I'm going to get one in sometime in the near future. Was that your first?

Thanks, John. Yep, this was my first.