I arrived at the Lincoln Center early so I could also observe the Republican rally scheduled for 5:30. State Representative Kevin Parker was, for lack of a better word, the emcee. 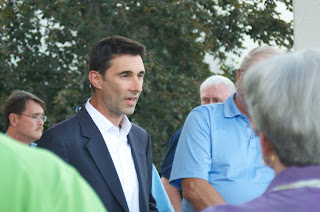 First, he introduced State Senator Mike Padden. The senator said Republicans need to articulate their views. He's for less government and he says people can do more for themselves than government can. He's also for less taxes, respecting private property rights, and moral values. He also says they need to engage the culture. I have no idea what that means. 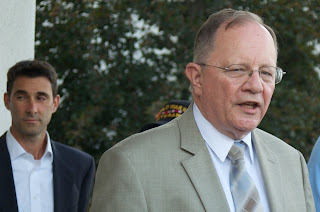 Next up in the rally batting order was 7th Legislative District Representative John Smith whom Parker described as a good friend. Smith acknowledged this has been a contentious year. He said that our country's founding principles need to be remembered, not reconsidered. He described them as personal accountability, personal responsibility, and free market principles. He told us that looking back at history, every nation suffered the consequences for failing those principles. He informed us that he was raised by a single mom and that he was poor. But in this country you can start poor and grow into something better. The founding principles are for that. He briefly mentioned there had been letters to editor and his response was that he's running on reality and truth. Apparently there was no reality or truth in the letters to the editor. 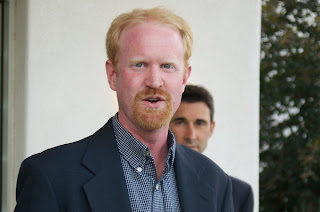 Next up was Mike Cannon. He's running for city council. He supports David Condon. Nobody could hear much of what he said because a couple guys off to one side were obviously at odds with each other's position on whatever topic they were on. 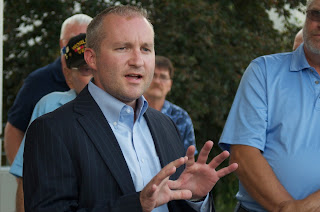 Then we heard from officers of the County Republican Party. Come to our meetings. 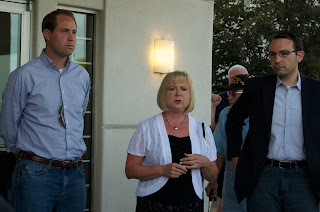 Kent Clausen, of the Republicans of Spokane County, invited everyone to join them. They've been around since 2009. For some reason nobody said the Tea Party word. 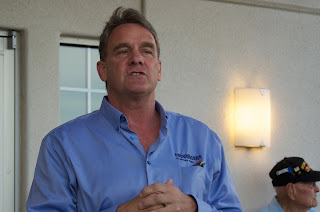 It wasn't much of a rally or at least what I would consider a rally. It was more like a meet and greet people running for office. No signs were permitted on the property so a couple of fellows from Walla Walla had to put their signs back in their cars. 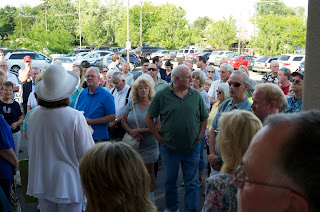 I get the feeling that Spokane City Councilman Mike Fagan doesn't like it when I take his picture. I don't know, it might be one of those Agenda 21 things. 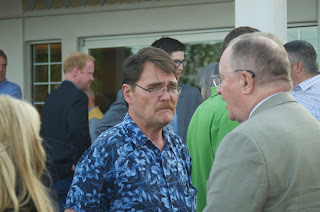 Kevin Parker ended the rally with a story about President Obama throwing the first pitch at a New York Yankees game. Derek Jeter allegedly told the president to throw from the mound, not from in front it it. To throw his best. And not to bounce it in front of the plate because he'd get laughed out of the park. Plus, he was throwing a pitch for America, not the Yankees. The whole point of the story was to emphasize leadership and doing your best. What's lost on the college professor telling the story, as well as those in attendance, is that President Obama has never thrown a ceremonial first pitch for the Yankees and Derek Jeter has been banned from baseball for cheating through use of performance enhancing drugs*. But, hey, leadership and do your best.

* Updated - Got my players mixed up. Forgive me, I'm not a baseball fan.

After the "rally" ended, we were allowed to enter the building for the town hall meeting. This time around it was down to business. After posting the flag, reciting the Pledge of Allegiance (during which a man near me practically screamed the "under God" part), playing the National Anthem, and a few introductory remarks we went to the Q&A period. Well almost. 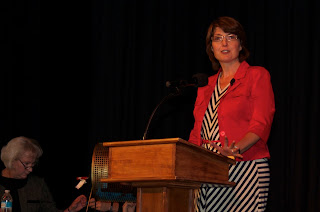 Steve Rusch (wearing the Mariners shirt below) made the trip here from Walla Walla. He's very passionate. I met and talked with him before the rally that was held outside. I had no idea he was going to do this, but he immediately began calling out Cathy McMorris Rodgers and being disruptive in doing so. The facility manager asked him to be quiet. After a few back and forths, security was called over. Steve wasn't about to leave voluntarily so he laid down on the floor. He was unceremoniously dragged out of the room by a Spokane police officer and a suit wearing an ear piece. I assume he was placed under arrest. (The manager was fair in warning people when they yelled or interrupted regardless of whether the person was for or against. Believe me, he had his work cut out for him. At least one other gentleman was voluntarily escorted from the room, but he had at least three warnings beforehand.) 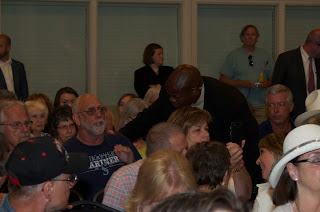 Once that bit of excitement was over, more fun began. Overall, those in attendance seemed to be evenly divided. The Affordable Health Care Act was the main topic of the evening. Cathy McMorris Rodgers fielded jeers and cheers for the entire hour. She was obviously more comfortable with the cheers. The jeers tended to freeze her in her tracks, but she was a trooper and she stuck with the talking points.

A grizzled veteran asked the crowd if any of them had ever been in a country that had socialized medicine. "If you liked it so much then why don't you move there?" he asked. An older man in front of me jumped up and said, "I'll buy their plane ticket. Ha ha ha ha." That man turned out to be a veteran who gets his health care through the Veteran's Administration, which is socialized medicine. When that point was made later on he was strangely quiet.

One talking point Cathy McMorris Rodgers emphasized was the debunked one concerning $700 billion being cut from Medicare. She made it sound like Medicare benefits were being lost. When pressed about the Republican plan for replacing the health care plan, all she could say was that they had one. She did not give any specifics. She also railed about President Obama having the temerity to waive the employer mandate of the Affordable Health Care Act for one year as if he was subverting Congress's authority. She believes Congress should make the decisions, not the President. And yet not 10 minutes later she spoke about how she will continue to delay the ACA as much as possible and referred to the delayed mandate as if it was a good thing.

It was a raucous, disappointing, and entertaining hour. I was amazed at how ugly people could be. It was like live talk radio. Outbursts from "both sides" happened all evening. "That's a lie" was met with "Shut up." Fan boys and girls stood and applauded like faithful acolytes. Loud boo's erupted in response to several of the congresswoman's statements. "Undocumented immigrants" was met with "You don't belong here." On that one, I don't think I've ever seen such a change from what I considered a pleasant, grandmotherly face to an incredibly hateful and loathsome sneer. She was unnerving.

I'm sure our representative was happy when the meeting finally ended. Nothing was accomplished except that everybody heard what they expected to hear. To some it was music to their ears and to others it was obnoxious. Missing for the entire evening was a common thread connecting everybody there. Sadly, I don't see our representative as being the person who could create one or make use of it.
Posted by Hank Greer at 11:17 PM

Great post Hank. It paints a more colorful picture of the meeting than the Spokesman-Review version.

One small quibble: I'm no Yankee fan, and not much of a baseball fan in general these days, but AFAIK Jeter has not tested positive for PEDs or been banned from baseball, although he has been injured for much of this season. Perhaps you're thinking of Alex Rodriguez who continues to play while appealing his PED related suspension.

Oops. I stand corrected. I'm not a baseball fan either. I can't tell the players apart without a program.