On the way home from the St Patrick's Day Parade yesterday, I asked Steph if she wanted to stop by a thrift store and look at albums. She was all for it. Ever since I bought her a Michael Jackson record she's been interested in ripping older music for her iTouch. The catch is that she doesn't want any music I recommend and already have.

So I thought this would be a good opportunity for her to find something on her own and appreciate it. There weren't many records to pick from but this one caught her attention. 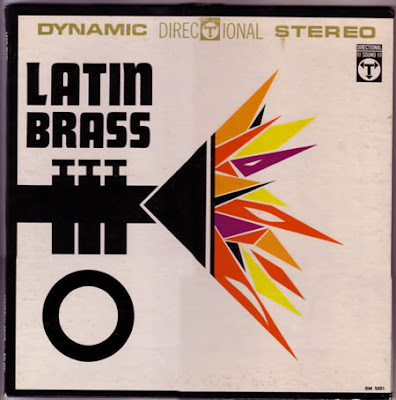 Latin Brass was recorded by John Evans and the Big Band. Yeah, I've never heard of them either. There's no date on it but it looks like it was released in 1961 since there's an advertisement for it in the Nov 6, 1961 issue of Billboard magazine. The "technical information" section on the album touts the three track recording tape used to make the record. Whoa! Three tracks!

Last of all there's this for the audiophile who knows their record-making technology.

Well, that sold me right there. But aside from all that, the record is actually very good. I showed Steph how to wash a record and then we ripped the tracks to mp3 format. And now she is doing the cha cha.
Posted by Hank Greer at 9:05 AM