This morning I received an invitation to attend an Earth Hour Rally for Mayor Verner and Climate Change Awareness. The rally was in answer to:

A group of Climate-Change-denying Tea Party and Patriot Party members are gathering at Spokane City Hall for Earth Hour, March 27th from 8:30pm to 9:30pm. They will be shining flashlights and holding banners to admonish Mayor Mary Verner for advocating for environmental sustainability in Spokane.

I thought this would be a great opportunity for Josh and Steph and asked them if they'd like to go. Josh thought about it for a while and decided he wanted to go but with a twist. He said that whenever there's an unruly and uninformed mob of people on South Park they always say "Rabble, rabble, rabble." He decided to make some signs and invite some friends to attend with him. 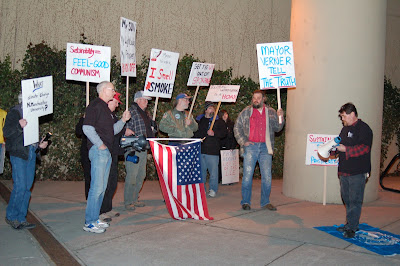 On one side of the entrance to City Hall, Mike Fagan and a few Spokane Patriots, most claiming to be well-versed in the necessary sciences, held up signs and proceeded to badmouth the United Nations, climate change, sustainability and Mayor Verner. Oops, they mopped the floor with the flag they venerate. 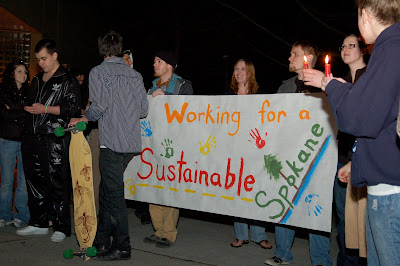 On the other side, an equal number of folks in support of sustainability and rational thought. Hey, Bart! 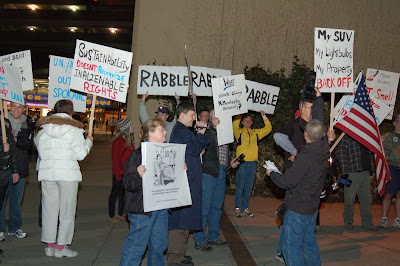 After a bit, Josh and his two buddies held up their RABBLE signs and started saying, "Rabble, rabble, rabble." If anyone asked, they explained the South Park origin of their protest and said they were protesting the ridiculous nature of their [Spokane Patriots] protest. 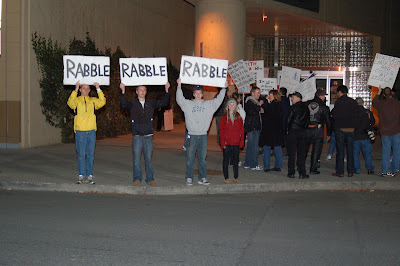 They also waved their signs at cars passing by. Although Steph came along, she only did so because I made her go after she tried to bail at the last minute. Not only was she glad she came, she was wishing she had made her own RABBLE sign. 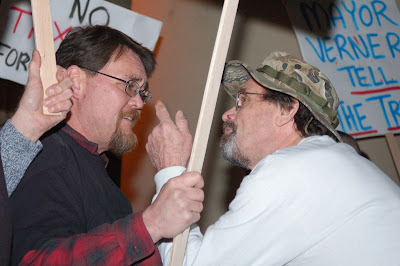 The scene got really tense for a while. Paul Haeder (on the right) was very aggressive both physically and verbally. He was obnoxious and didn't have a problem showing how well versed he is in the use of profanities. Mike Fagan (on the left) was spouting nonsense, but I didn't see him say or do anything to provoke anyone. A couple of people on both sides pointed bright lights and laser pointers at opposing faces. As you can see, Haeder got his nose scratched. I'm not sure what happened but he made it sound like he was assaulted. The Spokane Police showed up and everyone calmed down. The arguments that took place between people on each side were laughable in their futility to change the other's mind. The boys provided some lighthearted moments during the rally. Although they weren't on anyone's side, they enjoyed mocking the ridicularity of the Spokane Patriots. And from that The Rabble Rousers are born.

The Review has a couple of articles about the protest. Opposing comments essentially mirror the arguments at the rally.

Fagan, who earlier this month held a similar demonstration in opposition to health care reform, stood on a U.N. flag and led a chant of, “Hey, hey, ho, ho, United Nations gotta go.”

The man who most aggressively confronted him carried an Earth flag.

That would be Haeder.
Posted by Hank Greer at 11:29 PM

Killer post, Hank. The story and pics are just fantastic.

Just to clarify, Paul Haeder was hit in the face by one of the Patriots. They hit in with a sign early on in the rally. More than a dozen people saw it happen.

Knowing Paul Haeder, I can't imagine that he didn't provoke a response at all!

Excellent post! If my son wasn't over on the west side, he'd have been there too. If I had known, so would I! Love your rabble idea.

Would love to link your blog to mine and also I just may do an ireport on this. I am a cnn ireporter. Here's one of my latest on the tea party rally held in Colville last spring.

let me know when your next rabble protest is!

Thank you for the compliment. As a practice I don't link to other blogs. I don't mind if others link to mine but I don't pursue it. I did add you to my Google Reader subscription list.

As to the Rabble Rousers' next outing, you'll have to pay attention to their Facebook page. That is my son's doing. I observe but don't participate.

As a sarcastic city planner (not in Spokane, sorry) I appreciate the hard work you're doing. Keep it up. The city staff can't say it, but they enjoy it.