Last weekend I had a home project in which I removed the wall paper in the master bathroom which meant I had to apply texture to the walls before painting. Since the actual wall area is reduced a lot by a tub, window, shower and mirror, I decided go the easy route and use the spray can texture instead of hauling my neighbor's air compressor upstairs and going wild with a gallon jug of premix attached to a spray applicator.

At Home Depot, the young lady at the checkout station advised me that she may need to ask me for my birth date in order to purchase the aerosol can of texture. That confused me which, as my nearly-double-digit number of readers know, is easy to do. My gray hair, gray beard and the occasional protruding-from-my-shirt gray chest hair hardly peg me for anything less than the grandfatherly aged. But Steph was with me. So I asked if she meant mine or my daughter's age. It was mine. The young lady explained that young people have been known to "huff" aerosal products and some products require a birth date at purchase. She scanned the texture.

Nonetheless, I decided to be a good father. I showed the can to Steph and told her, "Don't ever breathe this stuff. It'll kill you."

"No duh, Dad," with a "do you think I'm stupid or something?" expression and tone of voice.

But that's not what I wanted to tell you about.

In today's news, you get the impression that huffing inhalants is epidemic among young people in America. Here's part of the press release from the Substance Abuse and Mental Health Services Administration: 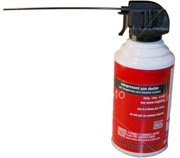 More 12 year olds have used potentially lethal inhalants than have used marijuana, cocaine and hallucinogens combined, according to data released today by the Substance Abuse and Mental Health Services Administration (SAMHSA) in conjunction with the 18th annual National Inhalants & Poisons Awareness Week.
...
The need to increase awareness of this public health risk among physicians, parents and others cannot come too soon for Kevin Talley, the father of Amber Ann Suri, who died in February 2009 after huffing. Her parents suspected something was going on when they noticed she had a pungent smell, glassy eyes, and complained about sinus problems. Although she was taken to a doctor, her real problem was not identified and she was treated only for her sinus symptoms. She died shortly thereafter.
...
Young people sniff products such as refrigerant from air conditioning units, aerosol computer cleaners, shoe polish, glue, air fresheners, hair sprays, nail polish, paint solvents, degreasers, gasoline or lighter fluids. Youngsters intentionally inhale these substances to get high. Most parents are not aware that use of inhalants can cause “Sudden Sniffing Death” - immediate death due to cardiac arrest - or lead to addiction and other health risks.

SAMHSA data from the 2006-2008 National Surveys on Drug Use and Health show a rate of lifetime inhalant use among 12 year olds of 6.9 percent, compared to a rate of 5.1 percent for nonmedical use of prescription type drugs; a rate of 1.4 percent for marijuana; a rate of 0.7 percent for use of hallucinogens; and a 0.1 rate for cocaine use.

I remember seeing television reports of glue sniffing back in the 60's and reading about kids sniffing aerosol paint back in the 80's and 90's, so huffing is not a new problem. A 2001 brief from the National Drug Intelligence Center showed that huffing was on the increase in the 90's.

That sounded pretty bad back in 2001 so I thought I'd take a look at the report being referenced by the news and issued by the Substance Abuse and Mental Health Services Administration. (The PDF version has more.) And there are even more charts here with a variety of breakdowns of the data.

And there's even more data than you can shake a can of paint at in the 2008 National Survey on Drug Use and Health.

And after reading it I had to ask, "Did the person(s) writing the press release of the news article(s) even bother to read this?" Inhalant abuse is actually on the decline. That's not to say that inhalant abuse doesn't warrant attention, but the way this is presented in the news you'd think huffing was rampant. So what gives? The first sentence in the SAMSHA press release is puzzling.

I can't find the data that supports that statement in any of the reports. Marijuana alone has a much higher use than inhalants according to the charts they present. The press release continues:

SAMHSA data from the 2006-2008 National Surveys on Drug Use and Health show a rate of lifetime inhalant use among 12 year olds of 6.9 percent, compared to a rate of 5.1 percent for nonmedical use of prescription type drugs; a rate of 1.4 percent for marijuana; a rate of 0.7 percent for use of hallucinogens; and a 0.1 rate for cocaine use.

The word "lifetime", as defined in the 2008 National Survey means used at least once, not for the rest of their lifetime. But either way, I can't find where that information comes from.

In 2008, an estimated 2.9 million persons aged 12 or older used an illicit drug for the first time within the past 12 months. This averages to almost 8,000 initiates per day and is similar to the estimate for 2007. A majority of these past year illicit drug initiates reported that their first drug was marijuana (56.6 percent). Nearly one third initiated with psychotherapeutics (29.6 percent, including 22.5 percent with pain relievers, 3.2 percent with tranquilizers, 3.0 percent with stimulants, and 0.8 percent with sedatives). A sizable proportion reported inhalants (9.7 percent) as their first illicit drug, and a small proportion used hallucinogens as their first drug (3.2 percent).

And here's a couple statements about current use:

So what's up with all the hype when the good news is that the abuse of inhalants is actually going down?
Posted by Hank Greer at 6:38 PM