Gotta Be A Better Way


View Bottom of Lidgerwood/Mayfair in a larger map

Every day I ride home past this and I remember that I forgot to call the Spokane Street Department about this sign. It's at the bottom of Lidgerwood/Mayfair just north of Foothills. It's a one-way for cars coming downhill and a two-way for bikes. The sign has been pushed into the bike lane and there's just enough room for a bike to get through. I keep seeing other cyclists take the risky route by going around the left side instead. 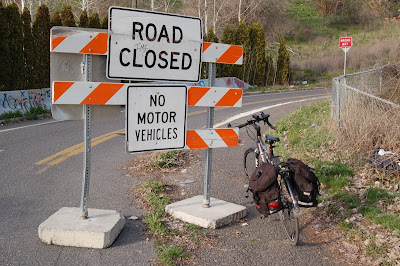 I don't know if there has been an increase in traffic or a decrease in depth perception, but this sign has been taking a beating which is probably why it's intruding on the bike lane. 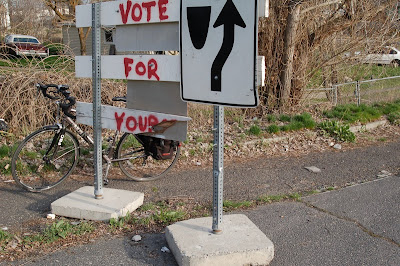 Hopefully I'll remember to call tomorrow and get this sign moved back out. I'm no traffic engineer but it seems like there could be a better way of enforcing the one-way and allow for the bike lanes.

Paul Dillon over at Down To Earth tipped me off to a site called SeeClickFix where you can report stuff like this. So I did. Thanks, Paul.
Posted by Hank Greer at 8:53 PM

Thanks for doing this Hank. Can't wait to see what happens next.