These are the kind of thinkers we have as elected officials that we must suffer today.

Republicans heaped ridicule on Transportation Secretary Ray LaHood at a Wednesday hearing after LaHood suggested on his Web site that bicycling and walking are just as good a way to get around as cars. To laughter, Republican house members suggested LaHood was taking drugs, dismissed the very idea of bike lanes and derided any change to a car-dependent society. "What job is going to be created by having a bike lane?" asked Ohio Republican Steven LaTourette.

He suggested that environmental sustainability projects have "stolen" $300 million from other programs and went on to attack LaHood's encouragement of bicycling at a personal level. "If it's not a typo, is there still mandatory drug-testing at the department?" said the wit, to chuckles from the back of the room.

The brouhaha over LaHood's Web site statements came up in the House Appropriations Subcommittee on Transportation, Housing and Urban Development. LaHood, also a Republican, had urged the states to "treat walking and bicycling as equals with other transportation modes." On his blog Monday, he also wrote, "This is the end of favoring motorized transportation at the expense of non-motorized."

"We think livability means giving folks the flexibility to choose their own mobility," he wrote.

But to a short-sighted, mean-spirited Congressman LaTourette it means Mr LaHood is smokin' dope. Congressman LaTourette's attitude matches that of narrow-minded businesses falling by the wayside described in Marketing Myopia (PDF) which, although dated (first printed in 1960--the link is to a 1975 reprint) contains some rather fascinating insight that's applicable today.

So what prompted the congressman to behave so poorly? Here is part of Secretary LaHood's blog entry the congressmen treated so derisively.

Today, I want to announce a sea change. People across America who value bicycling should have a voice when it comes to transportation planning. This is the end of favoring motorized transportation at the expense of non-motorized.

To set this approach in motion, we have formulated key recommendations for state DOTs and communities:

* Treat walking and bicycling as equals with other transportation modes.
* Ensure convenient access for people of all ages and abilities.
* Go beyond minimum design standards.
* Collect data on walking and biking trips.
* Set a mode share target for walking and bicycling.
* Protect sidewalks and shared-use paths the same way roadways are protected (for example, snow removal)
* Improve nonmotorized facilities during maintenance projects. 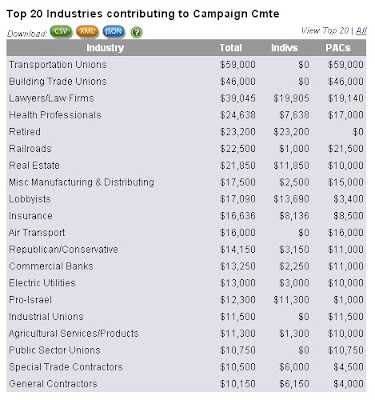 Data from OpenSecrets.org.
When you look at where Congressman LaTourette gets his money from, it's easy to see why he takes the position he does. But he doesn't have to be a sphincter about it.

Feel free to give him some feedback about his behavior or maybe what jobs you know of that are created by or supported by bike lanes. But if you do, please don't follow his boorish example.
Posted by Hank Greer at 6:58 PM

One of the things that's going to be really hard for us Americans to overcome as we progress along the path of increased use of non-fossil-fuel-driven transportation is the idea that we're taking a step backwards as a civilization.

We evolved and distinguished ourselves through the use of fossil fuels and we still use way more than anyone else. I was just listening to this Dodge Ram ad this week where they were playing on the idea that those who do the "real" work in this country deserve (no, are "entitled to") big rigs with lots of power and ammenities. I know that the guys that do "real" work need these rigs but what was discouraging is that I know the ad was targeted towards the fellas that wannabe and mostly drive these beasts around with nothing in the bed.

In the developing countries that I've visited, the citizens are clamoring to get off their feet and bikes and into cars. And they eventually will, because they have the manufacturing clout that we have lost. They will do it in way smaller cars than us and they will chip away at our crude-sucking dominance. And that will mean less oil for us.

We don't have a dog in the fight when push comes to shove for the oil because we don't make anything anymore and so we don't sell anything and so we're living off our massive reserves.

I just wonder if we will get innovative and move forward with creative, oil-free solutions to our transportation problems or if we will just persist in choking ourselves with our own hands by continuing to insist that we deserve the lions share of the worlds oil supply.

We're asleep at the wheel and we need to wake the hell up.