Senator Andy Billig and Representatives Timm Ormsby and Marcus Riccelli held the first of two town hall meetings today at Shadle High School. A Washington State Patrol trooper quietly hovered in the back as the number of attendees quietly grew to about 60 once the meeting got underway. Gray hair was in abundance and one young lady accompanying her father stood in for the youth within the district. 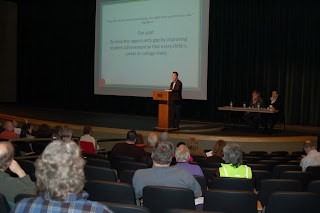 Each host spent a couple minutes introducing themselves and took turns presenting Powerpoint slides containing vast amounts of information that could not be digested by anyone in the short amount of time spent on each one. To his credit, Mr Riccelli helpfully explained several times, "This slide is kind of busy," for those who may not have noticed.

The important points, however, were properly highlighted. Half of the state's revenue derives from sales tax and when the economy suffers so does the state's income. Two-thirds of the state's spending is protected by legal or contractual requirements. The unprotected third includes categories such as correctional, human services, and some education which tend to suffer as easier targets of spending cutbacks. Washington State ranks in the bottom third for education funding but in the top third in education performance. Expanding Medicaid will provide health coverage for 385,000 people (that's almost three whole legislative districts)  and save the state $250 million and both parties support it. The state does not have a spending problem. In 1995, 7% of state taxpayer's income went towards state taxes. In 2012 it's 4.5%. The McCleary decision adds $1.4 billion to each of the next three biennium budgets.

Each legislator kept their presentations brief to allow for a one-hour Q&A. Senator Billig asked that each person keep their statements short and ask a question so that more people would be able to participate. The first question came from a teacher who didn't get the hint. As she went on with a story that left us all wondering where she was going with it, Senator Billig finally had to interrupt and ask her to ask her question. A couple more questioner's also tried to monopolize the microphone so they changed it up and had the legislative assistant hold it. Fortunately, a situation did not arise where he would have to yank it away. After an hour the legislators agreed to hang around a bit for anyone else who wished to speak with them.

Next Wednesday, the legislature receives the official word on expected revenue on which to base the budget. There are concerns that the federal sequester will result in a decrease in the state's expected revenue. For the most part our legislators seem to be working together to address the major issues affecting our state. Leaving aside the distraction of the Freedom Agenda I think they provide a lot to be hopeful for.
Posted by Hank Greer at 3:18 PM

Here's another busy slide, from the Olympian:

The agency [Washington State Healthcare Exchange] is private, but federal grants will fund the agency through December 2014. Afterward, funding will come from tax receipts from health care plans. Marchand said it hasn’t been determined whether the agency will be a nonprofit organization.

Are we clear? A private company or maybe non-profit funded by taxes, or not, let's say "tax receipts" ok, but run by, um, with, let's say FOR private health insurers guaranteed 20% profits by politicians who receive massive campaign donations and lucrative jobs but lets not say they receive them in return.

With such clear lines of authority and accounting and TOTAL lack of possible conflict of interest and kumbaya bipartisanship what could possibly go wrong given the millions, nay billions, of mandated payments from Joe and Jane Chump, er, Citizen and no cost controls? Obama was certainly right to include a ban on citizen Medicaid denial challenges in the ACA bill.

This is a machine that can run by itself. What, us worry?

Some things the pols won't tell you:

The Washington State ACA Exchange Inc's cut of ACA taxpayer booty exceeded 23 million as of last year. That could have been a shitload of Medicaid care.

Where's Billig? Or anyone?

The lack of oversight is for our own good.

Why would it cost in excess of $25 million in taxes, a hundred employees, a swank office building, a new category of organizational structure, and a high-dollar CEO to set up a glorified web site?

Well, I'm sure glad Liz Fowler landed on her feet! I was so worried for her.

The Health Exchange does look rather...odd. I thought it would be the non-controversial part of Obama's plan. But, Gregoire stacked the board with industry insiders and a guy from the Farm Bureau. Also, I don't get the cost of it, or the (possibly illegal) structure. Do all fifty states have this top-heavy boondoggle, or just Washington? If interstate commerce justified ACA, why not save money (and increase choice) with regional boards? Does the exchange and its "CEO" get audited, and by whom? Who sets the standards for exchange performance and spending guidelines? We're talking billions in overhead nationally. How much are the exchange execs paid?

The Olympian article said that Olympia has a glut of office space, why is the exchange financing a new building?

They're promising jobs in Spokane and throughout the state, but will these be state, federal, or private jobs?

Why can't the exchange be a state agency, at least? It seems perfectly contrived to evade scrutiny.

The secrecy is troubling. Try to get information from this cabal's website. The mandate seems to spawn ever-greater abberations from normal Constitutional practices.

Will lawsuits against the exchange be heard in state or federal court?

Who gets to decide the legal status of this corporation/agency? Why hasn't that status been determined?

Can its employees organize, and can they join government unions like AFSCME? If not, why not?

Can the structure of the exchange be changed by the state referendum/initiative process? For example, could voters compel elections for the board of directors?