Life On A Bike

One of the benefits of bike commuting is that your senses are exposed to more sights and stimuli. (I love the smell of barbecues and dinners cooking on the way home from work.) Taking different routes provides even more exposure and enjoyment. This morning I took the long way to work and was treated to a rafter of turkeys on Regal. I noticed the turkeys were not in the yards that had dogs in them so having a dog would probably prevent a rafter from homesteading provided the dog wasn't meleagrisphobic. 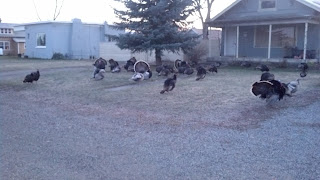 During lunch I rode up to the new Two Wheel Transit shop on South Perry to pick up some brake pads and a replacement retaining ring for my NiteRider light. What a great looking shop. If you're thrown off by the fact there's no bike rack outside, take your bike inside because that's where it is. After letting it sink in all day, inside is a great place for it to be anyway. Geoff was telling me how it would be great to have a bike hang nearby since there are a couple of good locations to have it. I think he should put up some strobes, dim the lights, put on some techno music, and host a bike rave. Who wouldn't feel the ecstasy being surrounded by great bikes in a spacious shop like this?

One the way back to work a car pull up behind me while I was stopped at a red light and honked the horn. I looked back at the car with mismatched-colored doors and fenders still sporting plenty of dents. The passenger yelled at me to get on the sidewalk.

Apparently he thinks speed is the factor that determines whether or not you can ride on the road. I turned towards the front and ignored the guy, privately gloating that my bike was probably worth more than the clunker he sat in while waiting for me to "get out of the way". Even though they kept sliding off, the passenger kept throwing insults at me. His lack of imagination was evident since about the only thing he could come up with was, "You fucker." What a turkey. I awarded him zero points for originality and another zero for inflammatory content. (I am reminded of the Bike to Work Week meeting I attended where I suggested "Every lane is a bike lane" for the back of the T-shirt. One of the other committee members (correctly) thought that was too confrontational. For this guy the T-shirt should read, "Every fucking lane is a bike lane!")

Boy, that felt good to say that.

After work I took the long way home and that included taking in the Children of the Sun Trail. Like the clunker occupied by two people offended by my presence on the road, just because something is ugly doesn't mean it can't be used. I saw four other cyclists, three joggers, and four walkers. 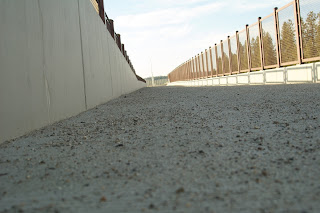 This isn't a rant or a complaint, but for those of you who design bike trails you should keep some space between the trail and the adjacent road. During the winter, grit and gravel is thrown down to help tires keep their traction. The tires show their gratitude by flinging the stuff to the sides of the roadway. If the trail is just on the other side of the barrier all that gravel builds up there and has no place to go. In several places this trail needs a good sweeping.

Hey, 30 days of biking is coming up. Take the pledge and get out there and ride. Who knows, you might come across some turkeys. Even real ones.
Posted by Hank Greer at 8:44 PM