The morning forecast called for 20+ mph winds with 30+ mph gusts. Combine that with the 30-some degree temp and I was pretty close to calling off my trip to the Wawawai Landing time trial race. But what the heck. It's the beginning of the road racing season and I've never done a time trial before.

During the drive on Hwy 195, every flag I saw looked like it was two minutes away from being shredded and the wind turbines were spinning like pin wheels blown upon by hyperactive five-year olds. 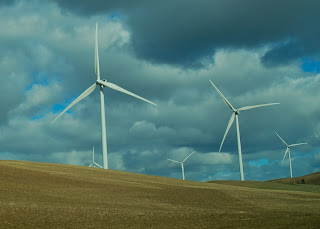 At Wawawai landing I was relieved to see the out part of the out-and-back time trial would be into the wind. Getting the hard part out of the way first suited me just fine. Then I could fly home to the finish. The route followed the Snake River in a southeast direction before turning back. 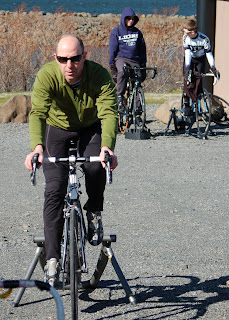 A little after 11:00 I got on my bike and pedaled up and down the road for a while to warm up. I rolled up to the start a couple minutes before my time and checked in. Following instructions I put my front wheel on the white line. The official counted me down. With five seconds left a dark cloud covered the sun and the wind suddenly picked up. It was blowing right in my face. I took off as best as I could with the wind letting me know this wasn't going to be easy. I leaned over and braced myself for six miles of fighting the wind.

A quarter mile down the road and it was getting easy. I kept shifting up until I was in the top gear. I spun my pedals for all I was worth to make the most of it. Of course, I made it to the turnaround point in excellent time--just like everybody else since we had the wind with us.

One word describes the ride back. Brutal. This was one of the strongest headwinds I've ever rode crawled through. It was on a par with two other bad ones I remember. Once on my morning commute I had to drop down to the bottom chain ring to get to work. And during a cross-state bike trip with Geoff, we were coming down from Rainy Pass and the wind was blowing up the Skagit Valley so hard we had to pedal to go downhill.

I shifted between to the top chain ring when the wind eased, which wasn't often, but mostly stayed on the middle ring. I was amazed at the guys who started behind me and rolled right on by like the wind wasn't a factor. My fortune changed with one kilometer to go and I was able to kick it into high gear and look good at the finish. Hence the smile on my face. 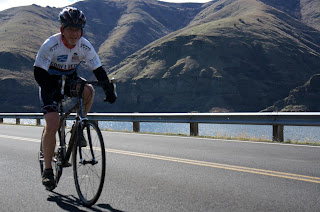 What was your time? Do they have them posted somewhere?

They have it posted. I did it in 42 minutes and change. About 28 of that was against the wind.

Ted, as rough as it was, I still had a good time. Wish I could've stayed for the hill climb. Awesome job raising money for the foundation.