This weekend we headed over to Seattle where Steph had a Taekwondo competition in which she sparred for the first time. She ended up going against a girl who's been in numerous sparring competitions. After a rough first round, Steph regrouped and had a much better second round in which she scored some points. She's in red and scoring with this kick. Now she has a better idea of what the competitions are all about and the importance of adapting to your opponent. She came away a little wiser. And a little sore. 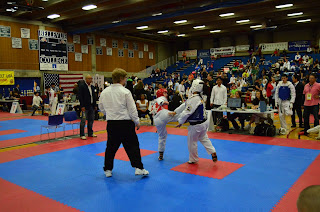 It looks like she's a Black Belt. Good for her, Taekwondo is a great Martial Art.

She is a black belt. And you're right. The sport has been great for her.