It was hot and dusty at the first race in the series. About 125 racers turned out. There were two waves at the start: those doing two laps and those doing one and they looked to be evenly divided. Geoff Forshag, Two Wheel Transit, was the evening's sponsor and as an extra bonus covered the fees for the junior racers. Mike Gaertner of Vertical Earth stepped up and said he would do the same on their night, June 6. Nice. 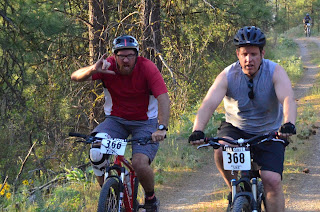 After the start I rode the course backwards to get photos and video of the racers. Despite the heat and hard work, they had a very good time. Pictures are posted on Facebook.
Posted by Hank Greer at 5:36 AM