The Crazy Will Continue

Michelle Bachmann has decided that since the law limits US Presidents to eight years, that same time period is long enough for her and she's not running for reelection next year. But unless something else happens, the American public will still be exposed to her craziness for another 19 months.

But don't worry, there are plenty of people on hand to take up the slack. Our own Cathy McMorris Rodgers, who puts a sane face on the insane Republican clown car, may not talk the crazy, but she quietly supports the policies. She speaks up apparently when she's told to because she never conveys an original thought, only repeating talking points.

She too is busy slapping the non-scandal cauldron with a canoe paddle, hoping the splashes and resulting mess will make people think something dirty has been cooking all along. The cauldron contains a bubbly sauce of Republican making called, Benghazi! Benghazi! Benghazi! So far nobody likes it. And regardless of the many press conferences where you may think different, she didn't get to the number four ranking position on looks alone. No, she is showing true leadership and doing what her ideologue masters tell her to. Like and share if you want answers. Oops, I mean ANSWERS!

One of her fellow Republican House members, Louie Gohmert of Texas, has been working hard--successfully, I'd say--to be the craziest Republican in the House. After Senator McCain visited Syrian rebels, Gohmert decided that McCain was also responsible for Benghazi! Benghazi! Benghazi!

"Yeah and then we know if it had not been for Sen. McCain and President Obama being for what we knew at the time included al-Qaeda in the rebel forces then we would still have a U.S. ambassador and three others alive today because Benghazi would not have happened. But by giving power to the rebel forces that included al Qaeda that brought that whole mess about and helped create problems in Tunisia and Algeria. So I’m not sure what to think about his going to Syria. If history is any lesson the people he met with he wants us to help should be very careful about what Sen. McCain’s support could mean for them."

Our fair congresswoman is still pushing for the Keystone XL pipeline like the loyal trooper she is. I've addressed the Keystone XL before so I'm not going to repeat myself. 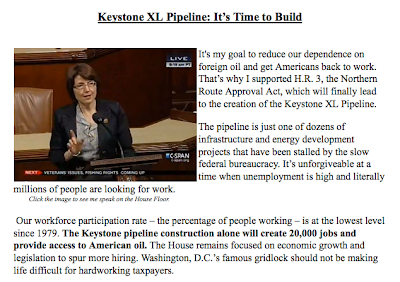 But I would like to mention that she's emphasizing her goal to reduce our dependence on foreign oil.

If we're so dependent on it, why are we exporting so much gasoline to foreign countries?

In the meantime, the House will continue to accomplish nothing as it insists on a "my way or the highway" path to self destruction. Crazy, isn't it?

Do Democrats continue to support the President's unilateral decision to wage war in Libya, a decision without congressional authorization as required by the Constitution?

Will Democrats similarly support the President if he decides to wage an unauthorized war in Syria?

Or, will they again dismiss anyone who challenges the administration to follow democratic process and tge law as crazy or terrorists, and use federal agencies to harass them into silence?

If you oppose the Keystone pipeline, Hank, then why did you vote for Obama, who supports it? Heck, he's already approved half of it, and has thrown anyone who protests in jail--including an opponent in his last election and Bill "Global-Warming" McKibben!

Democrats are beyond crazy. As Obama proved in his drones-surveillance-Gitmo speech, there is absolutely no connection between what Democrats SAY they believe and what they actually DO.