About 40 riders departed The Elk at 11:59 pm. Several familiar faces, like John Speare and Tom McFadden, were missing. First timers from Idaho and Bellingham(!) completed the field. I didn't see any ladies. There was a guy pulling a trailer with a boom box blasting music. That was awesome but we soon left him behind.

We flew through downtown, making almost all the lights, and got on the Centennial Trail. After a few miles the group of six that John and I were in grew to about 16. We had an awesome pace line ripping to Spokane Bridge Road where we promptly disintegrated. John and I, along with three others, stopped to pee and grab a bite. When we started back up the other three took off leaving me and John to fend for ourselves. But that was okay because we had a laminated copy of the directions and yesterday morning we had scouted out the route between Liberty Lake and Spangle to make sure we knew where all the turns were.

And we missed the left turn onto Idaho and ended up lost on Mission. Brilliant!

After getting back on track then, just as last year, we kept leap frogging various riders and groups as everyone stopped at different times and places for breaks during the middle 30 miles. Erik Erickson was well ahead of us but he missed the turn onto Madison from Dishman-Mica. We caught up with him by the time he backtracked. We also caught up with Scott and the four of us loosely rode together for all but the last ten miles of the ride.

Reaching the top of Bruna Road we were concerned about the condition of the descent. When we checked the course yesterday morning the Bruna Road descent led off with about 150 feet of thick mud. Apparently enough vehicles flattened out the mud and the sun dried it during the day as it was in pretty good condition with very few ruts. This year we did not miss the gated entrance to Dunn Road. That was a fun section of the course and much shorter than the detour we took last year after blasting by the gate.

John flatted while coming down the tail end of Elder Road leading to Valley Chapel Road. We stopped on the bridge so he could swap the tube out. While he was working, Pat and Eric pulled up. While rounding a turn, Eric had come upon a porcupine in the road. He could not steer away so his ran over it. It apparently slapped its tail against his shoe after the front wheel hit. The right side of the sole of his shoe was full of quills. That has to rank pretty high on the list of Midnight Century strange occurrences.

John put his wheel back together and we headed for the last major climb, Spangle Creek Road. It is still a slog. What a joy to have that behind us.

The rest of the ride was mostly uneventful. We cruised along making pretty good time. John and I didn't set an official goal but we thought we'd make it in about 8 hours. Jennings Road was washboard central again. About a mile before we got to Cheney-Spangle Road my pannier rubbed against my spokes. It's not supposed to do that and it got my attention immediately. The bolt holding the bottom of my rack had shaken out. The one on the other side was halfway out. I tightened that up and cannibalized a bottle cage bolt for the other side. When we got onto the pavement for the last 19 miles I cranked it up and pulled John into town. We finished at 7:53 am with four other riders we caught up with on the Sandifur Bridge. Nice.

John and I both agreed that this year's ride was more pleasant than last year's. While we still had washboard roads to deal with, it wasn't to the extent that we suffered through a year ago. The dirt/gravel section of Linke was graded and smoothed just yesterday and Elder Road wasn't bad. But Jennings was still a paint shaking machine.

Finishing at Central Food was cool. We signed in with our times and had our finisher photo taken. Six of us (numbers 8 thru 13) finished at 7:53. Erik and Scott arrived later and joined us at our table. Breakfast was delicious, which is to be expected at this establishment. Central Food has never disappointed me. 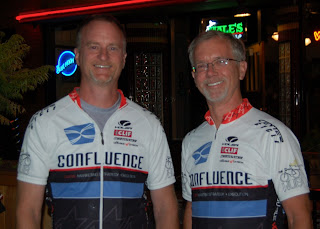 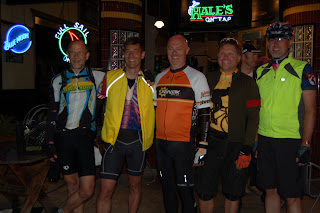 These Mount Baker Bicycle Club members came all the way from Bellingham. 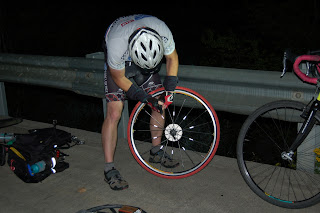 John flatted at the end of Elder road. 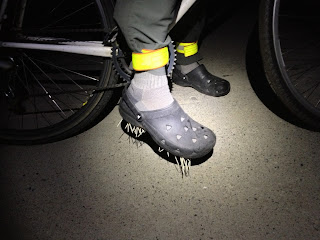 Then Erik pulled up with his porcupine quill infested Croc. 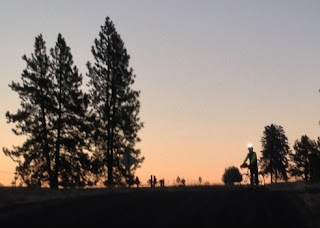 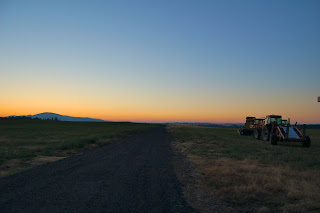 Sunrise with a better camera. 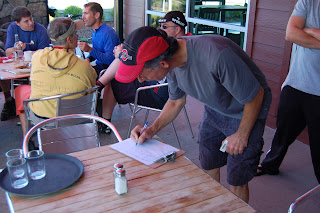 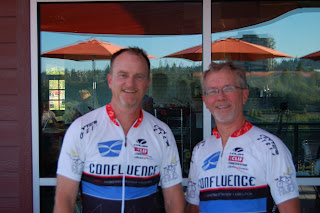 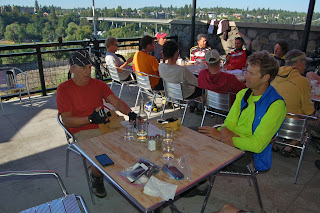