I refused to let the gray skies intimidate me as I rolled out this morning. I left early so I could climb up the north end of Five Mile Road. If you're not careful, as I have learned from experience, this road can fool you into thinking you're almost at the top.

How? Well, just before the top the road curves left and there's a guardrail alongside. If that's all you remember then the guardrail-lined left curves that precede it can make you think you're just about done and then slam you with the reality that you have more climbing to do. 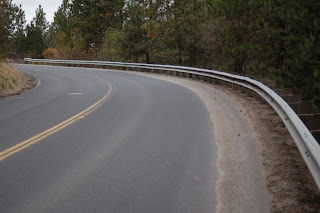 This is the first curve. 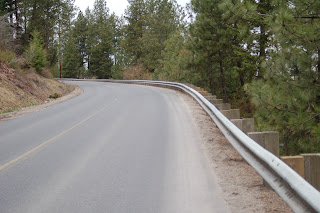 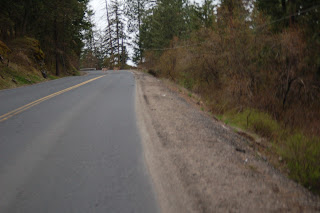 Deer up ahead. The pictures of the turkeys didn't turn out. 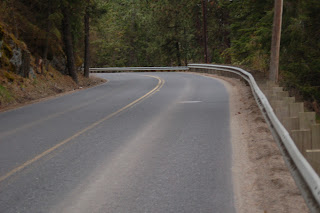 Not quite at the top. 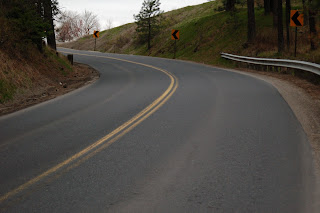 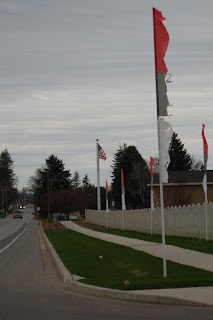 My reward for doing a morning climb was a stiff headwind the rest of the way to work. Yay! Why so happy? See the music reference in yesterday's post. 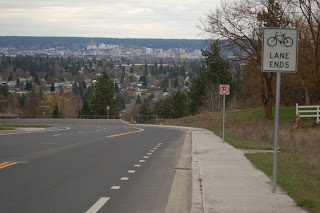 I continued on Five Mile Road all the way to Ash and decided to take Ash all the way to Broadway. There is a ton of traffic on Ash in the morning and that can be useful on a day like today. When you have a long line of cars going by you they break up the headwind for you.

When I reached the point where most of the traffic turns off for the Maple Street Bridge I only had about a mile left to go. I took Broadway to Monroe, blended in with traffic while I crossed the Monroe Street Bridge, and arrived at work just under an hour after my start.

My thanks to the hundreds of drivers who shared the road with me without incident.

Hey sounds like a good ride. I may have mentioned before I like riding on Ash past NW Blvd since the right lane is so wide. That wind was a killer - Broadway on the way home was a regular wind tunnel. Let me know if you take that way again might be able to ride along. Except for that 5 mile rd part :/