Between work at work and work at home I've been slammed lately so I haven't been bringing up much besides cyclocross. Now that I've had a breather, there are a couple of subjects I've been wondering about. 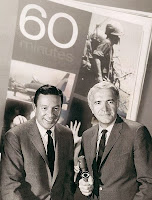 60 Minutes used to be well respected for its reporting on CBS. Heck, it was so good I watched it when I was a kid. I loved watching Mike Wallace figuratively rip into people. But I don't watch it much any more. Most television news leans more towards entertainment. The so-called news today consists of lots of teasers, sensationalism, and over-dramatization. It's something I blame on the consolidation of the media that taken place over the last couple of decades. Anyway, 60 Minutes recently exposed just how far off the journalism track their train has gone with their report on the attack in Benghazi that resulted in the deaths of four Americans, one of whom was the ambassador to Libya. The story was based on a book written by a security contractor, Dylan Davies, whose official statements about the attack contradict everything he wrote in the book. Laura Logan has since sort-of-apologized for the program's "mistake." In the meantime, the book, which was published by a CBS subsidiary, Threshold Editions, is yanking the book back. Maybe if they listed it as fiction.

What's with this special session Governor Inslee called to pass a $10 billion transportation package that had no chance of being passed but was really all about more tax breaks for Boeing so they'd build the 777X in Washington? In 2003, Washington State gave Boeing a $3.2 billion, 20-year tax break for building the 787 here. Six years later, Boeing built another 787 manufacturing plant in South Carolina thanks to an incentive package offered by that state. So when does the tax break war end and how will that benefit the state that wins when Boeing pays little or nothing in taxes, less in salaries, and profits even more immensely than it is already? Our state legislators fell all over themselves to pass this enticement using the justification of keeping the jobs here. In the meantime, the machinists union, the people who hold those jobs, are being asked to approve an eight-year contract that replaces the traditional pension with a defined-contribution retirement plan, increases health care premiums and co-pays, and restructures the wage scale so it takes 16 years instead of 6 to reach the top. Boeing will give everyone a $10,000 signing bonus if the union accepts and says they will move the jobs elsewhere if they don't. So what we have is the government looking out for the corporation and the workers looking out for themselves. In the long run the state and the workers get screwed and Boeing gets bank.

Eight days ago, Christian historian David Barton, who now is no longer considering running against Senator John Cornyn (R-TX) next year, explained that weather disasters were man-made. But it's not because of climate change. It's because we voted in politicians who supported abortion rights. According to Barton we're all suffering because we've lost God's protection over our environment. That certainly explains why the Philippines, a predominantly Catholic country where abortion is illegal, just got slammed by the strongest typhoon ever recorded.
Posted by Hank Greer at 7:03 PM

I'm still on the fence about the Boeing situation Hank. On one hand, the company is making a ton of money with the tax incentives our leaders decide to give them and I don't think it's right because we (tax payers) make up for the loss in revenue by paying a higher gas, property, utility... taxes. Does the employment rate for the area offset this loss? Not in my opinion and the company should pass some of the incentives to the workforce. But on the workforce side, those individuals make a very good salary and are in the low 6 digit figures with overtime. They're benefits are better than most other companies as well. The unions were needed and had their place in the early/mid 1900's, but now it appears they hold the company hostage for more of everything.
I think pensions are on the way out and if you want a retirement package, you need to invest in it and make it your motivation to do a better job. Technology is driving the USPS snail mail business into the ground but they still have to pay the pensions of all the retired personnel. Are we going to bail them out like we did the car companies?
With the current Boeing pension plan, all you have to do is hang on and do what your union rep tells you to do because they think they know best. Every few years a different union strikes and halts production or flights. If Boeing decides to move a portion of the manufacturing business elsewhere, it will hurt the state’s economy, but improve another’s via jobs, but again, more tax incentives. It’s a shame our government has to get involved to bribe large companies with a golden carrot on the end of a stick to stay in our state. I see it as another form of unions (Boeing) holding the state hostage while bargaining for a better deal at the cost of the tax payers. Corporate greed and bad politics is costing us billions.
I’m venting a bit out of frustration, but thanks for listening,
John

Tim Egan says it better than I can.