The snow in Sandpoint had melted slightly and then froze overnight. People who rode the course on Saturday left all kinds of ruts in the snow. I went out on the single speed to see what the course was like. It was incredibly tough. The ruts kept sending me every which way and the untouched frozen snow was a pain to get through. So I wussed out and bagged the single speed race since it would not be fun.

I figured the races would loosen things up and they did. It also warmed up and when it was time for me to race in the men's masters 50+, the course was churned to a creamy butter consistency in some spot and outright sloppy mud in others. I had the Michelin Mud 2 tired on Top Greer and they were awesome. I only fell down once but that was because I went the wrong way to pass someone on a turn. He took it further to the inside than I expected, which was where I was headed, and my front wheel got caught on his rear wheel. I couldn't go any more to the inside than I already was, but that was of no concern to my front wheel so over I went. I got right back up and passed the guy a little later on.

Slogging through the mud was both hard and fun. I was really smooth going through the tight turns and just had to slog my way through the straightaways. The run up got slicker and slicker with each lap. Instead of shouldering the bike, I rolled it and squeezed a brake for support to move my feet.

The bike and I got ridiculously filthy and I had my best masters race of the season, finishing in 10th. 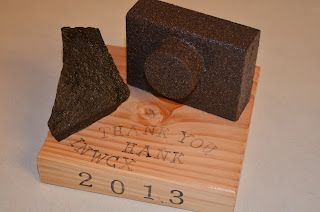 While handing out the series awards, Michael Emde call me up and handed me a camera-shaped trophy thanking me for taking and sharing photos and videos of the races. That was very nice of him.

You must put that final picture on you Christmas card… Too funny!

The picture says it all Hank it's a bummer your season is over. It looks like you're just getting warmed up. Great finish too.