Cathy McMorris Rodgers Has A Touch Of The Vapors

Today she posted a link to the 2014 Index of Economic Freedom report posted by The Heritage Foundation, a conservative policy and research organization. 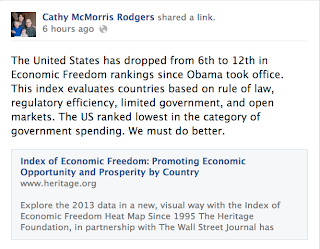 "The US ranked lowest in the category of government spending," says our congresswoman. "We must do better." What is she talking about? Do we need to spend more money? Or less? I don't know what she means.

Let's go to the index and see what it says about the United States.

Checking out the explanation of how the government spending score is calculated, you really have no idea if it should be a high or low or middle-of-the-road number. But there is some useful information.

No attempt has been made to identify an optimal level of government expenditures. The ideal level will vary from country to country, depending on factors ranging from culture to geography to level of development. However, volumes of research have shown that excessive government spending that causes chronic budget deficits and the accumulation of sovereign debt is one of the most serious drags on economic dynamism.

Hmm, so the first two sentences explains this is pretty much all bullshit. Spending untold billions on war and cutting taxes at the same time would be an example of what the last sentence is referring to. You know, like we did from 2001 until present. Less so on the cutting taxes during the last 12 months, but we're still pissing away too much on defense. I hope to hear our congresswoman speak up about that unnecessary government spending. We must do better, right?

The Freedom from Corruption category caught my eye so I dug into how that was computed. It turns out this score is based on the 2011 Transparency International's Corruption Perception Index. I checked out that report and found that the score should be 71. The 2012 and 2013 results were 7.3, which would result in a score of 73.

But here's the part I thought was the most telling--what contributed to that ranking.

Financial regulation. Although the United States has an effective anti-money laundering framework, experts are concerned about various legislative and regulatory weaknesses. More specifically, there are weak requirements for customer due diligence. Furthermore, there are loopholes that allow entities and persons to use shell companies as well as trusts to hide and launder proceeds from illegal activities. Worries regarding transparency in the U.S. financial system were heightened by the 2008 financial crisis, as well as recent notorious financial fraud and insider trading scandals.

Anti-fraud legislation. In June 2010, the Supreme Court issued a ruling that limits the scope of the “honest services” statute. This was a key national anti-corruption law that – until then – was particularly effective in the prosecution of corrupt acts involving public officials. Following the Supreme Court’s decision, several federal courts have overturned honest services fraud convictions in a number of cases, many of which included public officials. The decision also has serious implications for recent high-profile fraud convictions, and may result in the overturn of other guilty verdicts.

Government and politics. Corruption among government and political figures remains a concern. From fraud and embezzlement charges to the failure to uphold ethical standards, there are multiple cases of corruption at the federal, state and local level. Recent high profile scandals have involved councilmen in California and the District of Columbia, as well as mayors in New Jersey and an Illinois governor. Money laundering convictions and ethics violations by U.S. Congress representatives have also furthered citizen distrust.

Political financing. Transparency in campaign and political financing suffered a major setback in 2010. This followed a Supreme Court decision that de facto removed all limits to political spending by corporations and unions. The decision led to the creation of “super” political action committees, or “Super PACs”, permitting unlimited financing for political campaigns – and without donor disclosure. As a result, wealthy individuals, interest groups and businesses can increase their influence on the country’s political system.

I predict more listening to crickets in my future when it comes to hearing our congresswoman address these issues.
Posted by Hank Greer at 8:08 PM