George Nethercutt's latest commentary in The Inlander started out so great. His description of Peyton Manning was becoming truly inspirational. And then he made this hard what-the-hell-is-that turn into bizarro land and spoiled it all.

Peyton Manning was raised in a privileged atmosphere as the gifted son of a superstar quarterback. By all accounts, his family recognized the value of humility and respect and passed on those standards to their three sons. While Peyton is a multimillionaire, he fully respects those less fortunate, also recognizing the value of support staff and personnel — and they revere him for his genuine friendship, conduct befitting of someone possessed of humility and a caring heart. He pens handwritten notes to thank others for kindnesses and to acknowledge their accomplishments or particular struggles.

Mr Nethercutt continues telling us how awesome Peyton Manning is. He doesn't blame others. He accepts responsibility for his mistakes and failures. He doesn't act like a prima donna. He is someone to be looked up to. A model for us to follow.

The Mannings have had a good life, full of success and wealth, yet it seems that their heads are not turned by their well-earned money and fame. Any professional athlete with as much money in the bank or as many records in the books as Peyton and Eli Manning — or their famous dad, Archie — might find it easy to have a swelled head and be elitist. But the Manning family has a remarkable knack for steadiness and equanimity in the face of emotional situations that might make ordinary mortals behave differently.

Cool. I get it. I'm an ordinary mortal. Payton Manning doesn't let fame and money go to his head. And then Mr Nethercutt follows that with this. 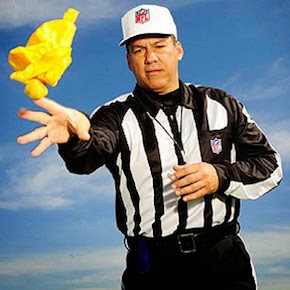 About the time the Manning documentary ran, a companion documentary highlighting the life of Tennessee Titans quarterback Steve McNair was also on the airwaves. It told the story of an equally gifted and famous professional athlete, and by all accounts, a good guy. McNair had plenty of fame and fortune, and a family of young sons, but an absent dad. His mother was prominent in the documentary, but not his father. Tragically, McNair made some mistakes and became involved with a mentally deranged woman, who shot him to death before killing herself. McNair was survived by his wife and sons, who will go through their lives without the husband and father they idolized.

A different famous quarterback, by all accounts a good guy, grew up without a dad and was killed by a mentally deranged woman he was involved with. What the hell does this have to do with the rest of the article? Mr Nethercutt tells us.

We're all influenced by the kind of upbringing we have and the values that are instilled in us early. Those without enough positive early influences may not have the tools to cope when challenges touch their lives.

Oh, so it was the kind of upbringing he had. Steve McNair didn't have a dad to tell him, "Son, don't ever mess around with a mentally deranged woman. She will kill you." What Mr Nethercutt is implying is that the single most important cause of McNair's behavior and murder was his absent father. All those other family members, teachers, friends, team mates, coaches, and countless other people he interacted with obviously had little or no effect on him and the choices he made.

I didn't know much about McNair, but a quick look with a search engine gave me plenty to read. Mr Nethercutt essentially slams Mrs McNair and Steve's older brother Fred who helped raise him. If he should slam anyone it should be McNair's father for leaving. And yet that doesn't relate to the rest of his commentary either.

No, for Mr Nethercutt, the father's presence (Manning) or lack thereof (McNair) was the key difference here. Next he'll tell us a young man raised by a single mother has no chance of going to Harvard or becoming President of the United States. Oh, wait.
Posted by Hank Greer at 11:26 PM

yeah that was just strange how he threw that in there about McNair's absent dad at the end after the lovefest with Manning, but I guess that was the main point he wanted to make. And he bases all this on a short documentary he saw on TV.