Some years ago Kathy and I received a letter from a niece in which she told the story of her church's mission to Japan. She and her fellow young evangelists would pray in front of temples trying to free the Japanese from Satan's hold, which she explained was pretty strong there. They would also stand around in train stations holding a sign saying, "Free English Lessons". Once she was approached by a someone interested in improving their English speaking skills, she would tell them all about God and the Bible. In English, of course. The person receiving the "lesson", being part of a very polite and inoffensive society as a whole, would politely sit through the "lesson" until they finally had to go. To me that was unusual because if Satan had such a strong hold on the Japanese, why would they tolerate hearing about God and the Bible? Unless of course, Satan had such a strong hold that he didn't mind the chance of losing the one here or there to a young, fervent Baptist. Or perhaps he just enjoyed the irony of a Christian using of a subterfuge. 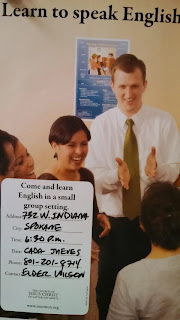 Anyway. Subterfuge was the first thought that came to mind when I saw this notice on a bulletin board in the building I work in. But I'm sure it's all on the up and up.
Posted by Hank Greer at 6:05 AM

The misionaries are actually commanded to ride like dorks:

And lo, shalt thou go forth to all nations, two by two, on Huffies

Thou shalt set a bad example, to the children of our nation
And to children of all nations

So by doing, you may bring scorn on all cyclists
Which, actually, is our real goal
Don't tell anyone that last bit

We've got a lot to learn from these "elders." After all, they are spreading a message primarily via face-to-face air gap. Jesus himself was basically all airgap. Sermon on the Mount? Big air!

So far, we've mostly concentrated on the ability to move messages while avoiding the NSA-surveilled grid that took down Occupy. Our modes have been democratic resistance movements under oppressive regimes, while taking advantage of the relatively freer space and vectors we still have.

That's fine as progressives as continue to stand down from the Democratic Party, but by mid 2015 we will be in dorky missionary mode as we launch our own party and bid. We'll still need some sort of airgap messaging grid, but also Huffies, cheap suits, and gimmicks.

Under the rolling convention concept, Progressives would adopt our platform in Bluffdale, Utah. So, plenty of chance to learn from Mormons.

Hillary looks to be on our to becoming our dream opponent, given the deBlassio sellout to Bill.

We want to make sure her running mate is James Clapper.

But, lots can happen til then. Still, the news is worse for fauxgressive Democrats and Rump Republicans every day.