The Fun And Folly Of Youth

Distance runners train year round. Yesterday Josh said he and some of the other runners were going for their run on Christmas Day at 3:00 am and then go to Shari's for breakfast afterwards. This morning I got up at 7:00 and found Josh lying on the couch watching television. I asked him how the run went. The run was as good as it can be considering how difficult it is to run through deep snow. On the way to Shari's one of the guys thought he'd be cool and drift around the corner into the parking lot. Unfortunately his tires held and he drove straight into a snow berm, burying the front end. They spent about a half hour digging him out and decided to call it a day after that. 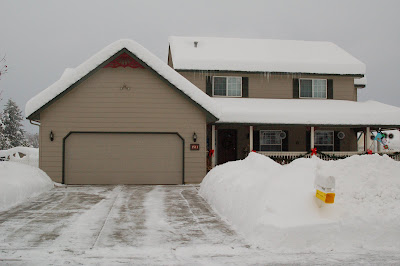 Speaking of digging out, I spent about an hour shoveling 6-8 inches of snow from the driveway. Again. I'm shooting for neatness points.
Posted by Hank Greer at 9:48 AM