Going The Distance And Then Some

Josh took my camera out to the USATF Cross Country National Club Championships held at Plantes Ferry Park this morning. Looking at what the runners had to endure reminded me of something. I mean, how many crazy people will endure poor conditions to do something they enjoy? 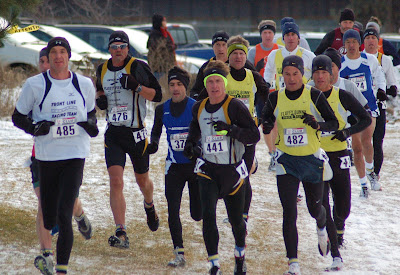 Anyway. Back in the fall of 2002 I traveled to Stanford University to watch my oldest son race at the Stanford Invitational. He ran cross country for Mead High School and this was his senior year. (I always enjoyed watching the Mead High School cross country team. It was impressive to see two buses pull up and disgorge a sea of blue as over 40 young men poured out dressed in their sweats. It was an imposing sight when contrasted with competitors' teams of 15 or even as few 7. While the varsity race is limited to seven runners, the junior varsity races always had in inordinately large number of Mead jerseys. It was great.) While hanging around the Mead team's area on the golf course where all the racing was to take place I happened to meet an alumnus of the Mead running program. He was living in San Francisco and decided to come and watch the runners from his old school. He had an enlightening perspective of distance racing--from the point of view of someone who almost always finished DFL.

"People don't realize that distance racing is a painful sport," he told me. Aside from your training and conditioning, a myriad of things can affect the outcome of your race. A crowded start with people sprinting to get out front, elbows knocking you aside, a competitor's spikes cutting your calf or ripping your shoe off, the varying terrain, the wind, rain, snow, and oppressive heat to name a few. "I was not a fast runner. I was actually pretty bad at it. But the reason I ran cross country was that the program gave me the discipline to try my best and do better than before. It boosted my self confidence. But I hated the pity clap," he said. "You know, the leaders had crossed the finish line fifteen minutes after the start but I was coming in at twenty or twenty-one minutes. Most of the finish line crowd had thinned and the few that remained would half-heartedly clap their hands and say, 'Good job, Mead'. I called that the pity clap--an acknowledgment that at least you tried even though you had no chance of winning the race. They had no idea what I had just gone through to take six seconds off my best time and set a new PR."

I realize he sounded bitter, but he wasn't. He was trying to convey the importance of how you view yourself and examining your motivation. Compare, "I compete to win" with "Why compete if I can't win?" with "I compete to better myself". Which is the healthiest attitude? And how do you instill that in yourself and others?