A friend of mine got suspicious about an ad on Spokane's Craiglist and brought it to my attention.

The first thing I noticed about the ad was that the description was in an image file instead of typed in. Why would you do that--unless you planned on using that same image elsewhere? I checked out the HTML of the ad and found this: (I mangled the HTML so it'll show up in the post) 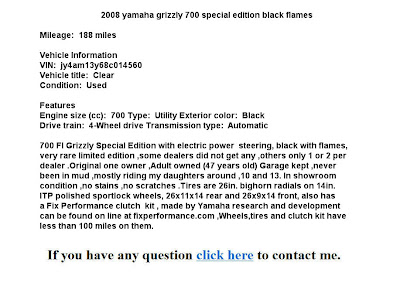 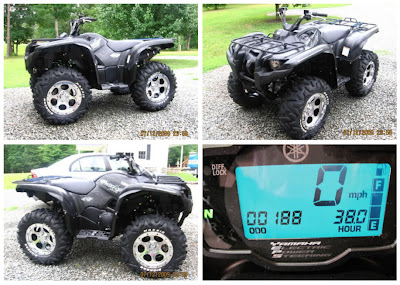 The two images, the description of the Yamaha and the four-picture collage, come from an account on Photobucket called sergiorodrigo. They are the only two images in the account. (As an aside, that pale blue display just doesn't look right to me. I would expect a monochrome display. But I can't say for sure because I don't know squat about the Yamaha Grizzly, Special Edition or not.)

As you can also tell from the (mangled) HTML, clicking on the images sends you to http://foormac.com/ygrizzly/.

First I looked at the domain registration info of foormac.com.

A a whitepages search and a pipl search of Holly Swope in Missouri came up empty. Holly's phone is a Cingular cell phone number.

Sending your browser straight to foormac.com gets you a page that simply says "Holding page for 123-reg" which means the default page has never been updated--since Aug 31, 2009. Netcraft says the site is located in the United Kingdom.

Nothing seems out of the ordinary so far, right?

Here's the form on foormac.com you get after clicking on either image in the ad: 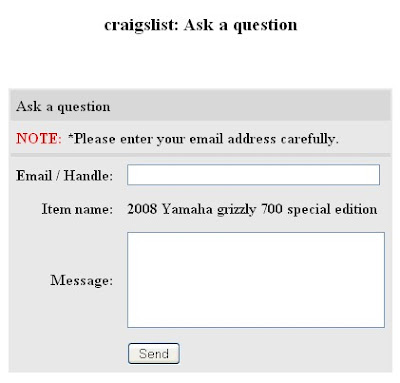 So I checked the HTML on this and found:

The email form sends the data to and executes code on a server presumably based in Australia. I went to the ezegroup site.

The Eze Group of Companies professional services and products are designed and targeted towards reducing operational costs, escalating turnover and increasing the profile of your business.

Our products and services are designed to enhance your business and reduce your management workload. We make no secret about wanting you as our client for life.

I guess using an image instead of typing the same stuff over and over would reduce operational costs. Posting the same ad in a multitude of cities--and claiming that item is in that city-- would increase the profile of your business. I wonder if the Eze Group knows how some people are trying to make eze money using their eze servers.

A Google search for "ezegroup.com.au" and "ask a question" gave me this result:

Which led to another form. Wow, deja vu all over again. 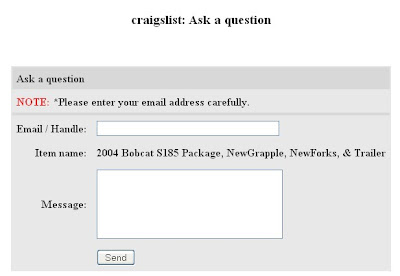 I advised my friend that when he finds something on Craigslist, he should do a search of the description. Had he done so with this Yamaha Grizzly, he would have found it was advertised in many places. Some have been taken down, but here are a couple that are still up as of this writing: Atlanta, Louisville, and Ann Arbor.

There are a lot of scam ads on craigslist, and they're generally pretty easy to identify. What makes this one interesting is the location, Priest Lake. Normally scammers use the name of the craigslist section as the location, such as "spokane" or "Spokane / Coeur d'Alene". So apparently this scammer is scraping locations from the list to make their ads seem more legitimate.
- Ventura

Thanks a lot for posting this info. They're running one in Tucson for a Dodge Ram 1500.