A Republican Offers An Idea To The Republicans Looking For Them

Cathy McMorris Rodgers had this to say on her Facebook page yesterday.

Now remember why AmericaSpeakingOut.com was created:

This site was developed as part of an official effort to increase the dialogue between Americans and their Congress.

Here is her "idea" in full. 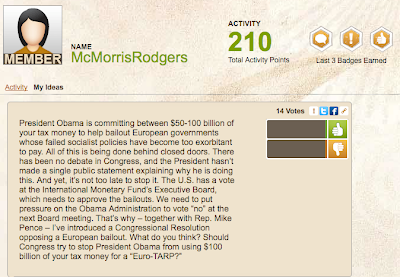 Something else posted on the site:

This website is paid for with official funds of the Office of the House Minority Leader – no political or campaign funds have been used for any portion of the America Speaking Out project.

"Official funds of the Office of the House Minority Leader" means our tax dollars. Cathy McMorris Rodgers is talking to herself--at our expense.

Now, come on, does she need to post this "idea" on AmericaSpeakingOut.com so that Congress will listen? Or is this a craven attempt to score points?

It's enough to make you wonder what the real purpose of the site is. Okay, not really. It's pretty obvious.
Posted by Hank Greer at 12:00 PM