About a month ago, Rep Eric Cantor, the Republican Whip, launched YouCut, a site where you can vote for one of five wasteful--at least what the Republicans identify as wasteful--programs.

YouCut – a first-of-its-kind project - is designed to defeat the permissive culture of runaway spending in Congress. It allows you to vote, both online and on your cell phone, on spending cuts that you want to see the House enact. Vote on this page today for your priorities and together we can begin to change Washington's culture of spending into a culture of savings.

The one with the most votes apparently becomes a Republican amendment to a bill and the House members' votes on that bill get posted, like so:

So what's on the chopping block for this week? One of the choices is the Safe Routes To School Program. 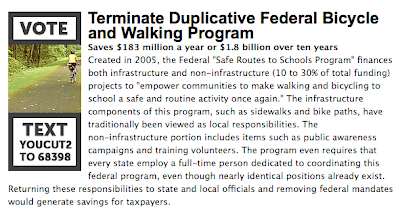 From the Safe Routes to School Program site:

The Program provides funds to the States to substantially improve the ability of primary and middle school students to walk and bicycle to school safely. The purposes of the program are:

1. to enable and encourage children, including those with disabilities, to walk and bicycle to school
2. to make bicycling and walking to school a safer and more appealing transportation alternative, thereby encouraging a healthy and active lifestyle from an early age; and
3. to facilitate the planning, development, and implementation of projects and activities that will improve safety and reduce traffic, fuel consumption, and air pollution in the vicinity (approximately 2 miles) of primary and middle schools (Grades K-8).

Can you believe that this "permissive culture of runaway spending" is wasting our tax dollars on this? Next thing you know someone will want to end the tax cuts for the rich.
Posted by Hank Greer at 1:49 PM