Josh and I went over to Tacoma on Sunday to do the cyclocross race on Monday. I entered the Cat 4 Men 55+ and Cat 4 Men races at 9:00 and 10:00 respectively. Josh signed up for the Beginner Men race at noon. I had a good start on my first race. I used the short straightaways to pick off one person at a time. I passed my third victim just before the downhill that led to a sand pit. Even though I had gone through that several times without a problem, I did something wrong this time. Instead of going between the two tree roots outside of the sand pit, I drifted left in the sand and hit a tree root at speed. The next thing I knew I was picking myself up off the ground. 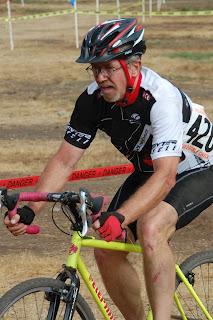 It felt like someone hit my knee with a hammer and then dropped me on my shoulder so I took it easy for the remainder of the race to work through the pain. I felt much better for the next race and did much better.

Josh tried the race on my bike. He was okay with the racing but not with my bike since it doesn't fit him. 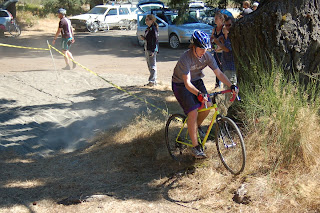 The tree root in front of Josh is the one that gave me my "Agony of defeat" moment. 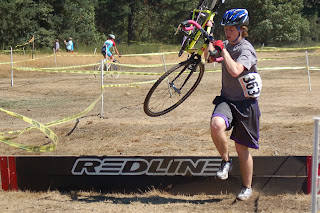 Josh killed when it came to running. He was passing everybody on the run up and blew through the barriers. He thought he would've done better if he'd just carry the bike instead.