This year the Mead School District opened a new high school called Riverpoint Academy. It's a STEM school that includes the arts and it's been in the making for over two years now. We were excited when we first heard about it last February. After attending the open house, Stephanie decided she wanted to go there. Attendance was opened only for juniors this year and limited to seventy-five students from Mead and Mount Spokane High Schools. If more than 75 students applied then they said they would have a lottery. They didn't draw names so I guess the numbers worked out okay.

Today was the grand opening for the school, attended by Governor Gregoire, Spokane Mayor Condon,  Mead school district leaders and teachers, local business leaders, and us parents. Lots of speechifying and well-deserved words of praise from all the speakers for everyone involved in making Riverpoint Academy happen. 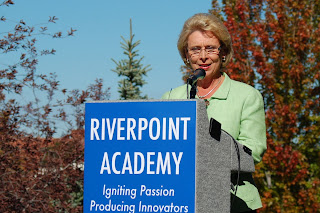 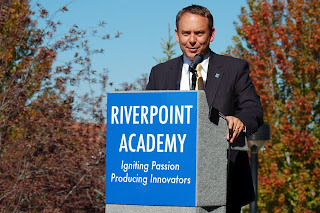 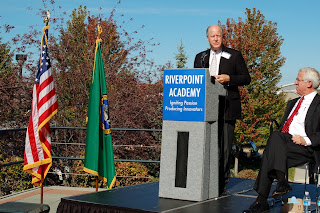 The last speaker was Dean Allen, Board President of Washington STEM and CEO of McKinstry. I enjoyed his frank talk of having a company with so many STEM jobs that has no problem finding employees but with the problem is that they're not necessarily from Washington State. Much of what he and the school district speakers talked about was partnering schools with businesses so the students would be more prepared for college and able to take on a career in a STEM-related field.

Then came the part that surprised me--asking for donations. One local Mead mom and dad who have a successful biomed-related business announced they were donating $25,000 for the third year in a row. Dan Butler, Mead School District Deputy Superintendent, and one of the key players in making Riverpoint Academy happen announced he was donating $5,000.

Back when we first talked to Dan and the Riverpoint Academy staff, I asked about funding for the school. I was assured the Mead School District had "enough funding to sustain this for the next five years". (bolding mine) But after seeing all the iPads with wireless and cellular service issued to each student--they contain the textbooks--and a mess of MacBooks on a cart, I have to wonder what "this" means. It's commendable for a person to give $5,000 to a cause he is personally and professionally vested in, but since he's in a position to know what funding the school needs, for me it begs the question--does the school need that $5,000 in order to function?

I'm also a little uneasy about businesses contributing money to a public school. Call me cynical, but in this day and age I see too many businesses/people giving money and expecting something in return.

I think this school is a great opportunity for Steph and the other 70+ students. So far she has had days where it was fun and energetic and days where she was swamped with homework. And she has yet to start her online German course and her EWU-taught math class. This will be an interesting year.
Posted by Hank Greer at 7:56 PM

Elites increasingly focus on education as a way to avoid a realistic discussion of unfair trade and economic deregulation as causes of unemployment and wage declines.

What these people mean by "education" increasingly looks like indoctrination into a narrowly defined neoliberal economic theory, with philanthropy taking the place of substantive structural reform.

STEM skill sets are but one component in unfair global labor competition, and they pale next to wage costs.

The same elites who hurrah Tom Friedman's blame-the-worker education philosophy fail to notice the inconsistency in Friedman's arguments. While Friedman makes an anti-democratic argument that Americans can no longer "write the rules" for our own country because of GLOBAL competition, he goes on cite this NATIONAL statistic:

The unemployment rate today is 4.1 percent for people with four years of college, 6.6 percent for those with two years, 8.8 percent for high school graduates, and 12.0 percent for dropouts.

Well yes, but that NATIONAL statistic largely irrelevant to Friedman's (and Obama's and Clinton's and Romney's) own argument. All that it shows is that non-skilled and unskilled jobs moved overseas faster than so-called STEM jobs. Friedman is arguing, though, that STEM jobs are also increasingly in foreign competition. Although that is likely true, current national statistics don't necessarily show that.

On the contrary, the statistics simply prove that within the current national economy a college educated American will more likely find work than an American high school dropout. That's important, but a non-sequitur. What Friedman is trying to avoid are international wage comparisons, or criticism of the trade agreements like WTO or regulatory frameworks.

More bleakly, Friedman/Obama etc do not acknowledge that national education/unemployment statistics do NOT actually suggest that improving STEM skill sets will significantly increase future relative competitiveness for US students in a globalized labor market. Considering all factors, the case for expensive STEM education is not so persuasive.

STEM-skilled foreigners work cheaper. STEM-education in other countries is also cheaper. STEM-educated students abroad have far less school debt relative to Americans, and can command higher salary-to-debt ratios by taking US jobs, even at a discount. Many foreign students will graduate without any debt at all.

In other words, a US student acquiring the same STEM skill set will almost always graduate at a marked disadvantage to foreign competition. Yes, that student may be better off within the DOMESTIC job market competing at McDonalds with high school dropouts, but Friedman and the elites are arguing these STEM students can compete on salary etc for elite jobs with foreign students. They can't.

Actually, it may be better for American students to avoid the debt and major in basket-weaving. Ask current well-educated but unemployed college graduates if the education was worth the debt. Their experience is what statistics suggest is the future given current trends.

And you know what? We also need jobs for high-school dropouts. They will always be with us. If the only way to get a job in America's future is to somehow finagle a debt-free PhD in a STEM field, our unemployment rate is going to be 80% instead of 8%.

So in the 90s we were all supposed to be software engineers, until all those jobs went Bangalore.

In the 2000s, we were all supposed to be lawyers until the corporations found it cheaper to farm out that work too. Now Gonzaga can't fill its law school.

So now the education industry is going even vaguer to find new suckers to plump its bottom line. STEM!

A sucker matriculates every minute!

Universities were Obama's top contributors in '08. They gave more than Goldman Sachs, yep.

University brass gives themselves (and the football coach) a raise. Ka-ching!