So today was the first (and main) day for the bike and pedestrian counts at various intersections in a number of cities. During my commute in this morning, I saw a hi-viz jacket at the intersection of Post and Buckeye so I swung by to be counted and say hello. It was Gary, a very nice guy, retired boilermaker, and as you can tell from the photo, a cyclist. 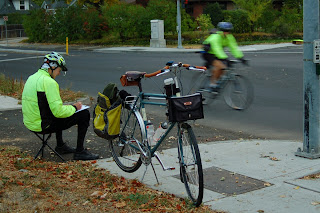 I had the afternoon shift at Rowen and Addison. I'm glad I wasn't counting cars. That would've been overwhelming. After an hour the guy living in the corner house came out to see me. He said he didn't appreciate me hanging around on his property and he was concerned about criminal activity. I was on the sidewalk, but instead of getting in a pissing contest I explained what I was doing and asked if I could stay there for another hour. He was cool with that. I wonder what kind of heinous criminal activity he expected out of a gray-haired man wearing a bike jersey and shorts. 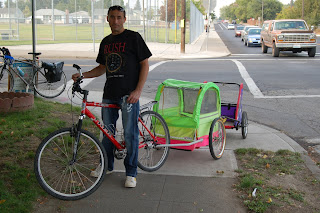 This fellow showed off his double trailer set up. He carries his camping and fishing gear in the front trailer and the dog in the back. 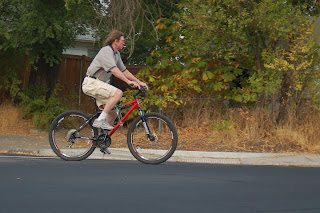 Of the 23 cyclists I counted, 12 were not wearing helmets. Ten blew through the four-way stop like they owned the intersection. 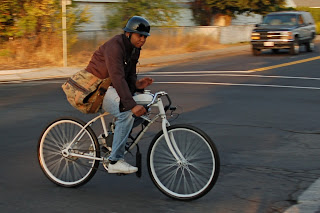 This guy came ripping down the road but was hardly pedaling. Once he was close enough, I saw and heard why. He's motorized. That's a sweet looking bike.
Posted by Hank Greer at 8:48 PM