It was a decision I fortunately did not have to regret. I was reviewing what items I was going to carry during the 25k River Run. Hmm, house key? Nah, Kathy or Steph will be home so I'll leave it. I loaded my pannier, put on a wool cap to keep my ears warm, rolled the bike out and close the garage. I turned off the driveway, heading towards Highway 2, and I noticed I couldn't see behind me. That meant I didn't have my helmet on. And I just locked myself out. I could ride without or I could ring the doorbell for who knows how long before someone came to the door. I chose to do the 20-mile round trip without a helmet.

Since there is so little traffic early Sunday morning I had no traffic-related problems while taking Country Homes and Francis to Nine Mile Road. 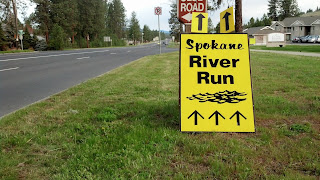 As usual, I arrived well before my start time. And here's a lesson I learned, which proved that once again learning has not occurred for Hank. For the past couple of weeks I noticed that my shoe clips into my left pedal on one side only. I kept thinking I'd check it once I arrived at my destination but I'd always forget to do some. This morning, after scouting the start area, I started to ride over to the bathrooms. I noticed the pedal problem and decided to check it since I had nothing better to do. It's a loose screw problem, but not as serious as Pat's. I have plenty of pedals so I'll swap that out at home.

The lesson here is that you should check whatever is wrong when you notice it. Maybe one day that snippet of wisdom will be permanently embedded in my feeble brain, but don't bet money on it. 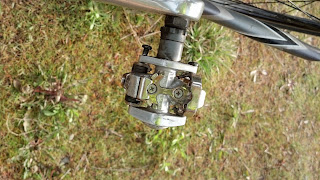 I was going to leave my bike at one of the tents when Jerry Lynch, one of the race organizers, asked me if I needed a place to put it. He offered to let me lock the bike to his trailer and I accepted. He said he'll look at bringing a bike rack next year since mine was the second bike using his trailer. That would be cool. I locked up my bike and left a sign should a worst-case scenario happen during my run. 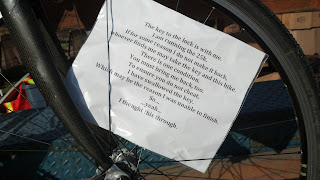 There was a lot more traffic during the ride back. Once I reached where Nine Mile Road intersects with  Francis, I turned left on Assembly and then followed Woodside to Five Mile Road. That kept me out of the worst traffic. I notice there's still a lot of crunching from studded tires 20 days after they were supposed to come off.

Now to fix that pedal. And always take my house key.
Posted by Hank Greer at 2:03 PM