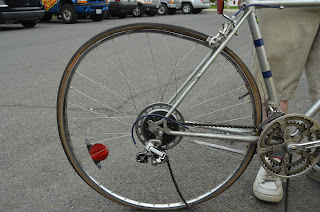 It's wasn't the worst wheel I've ever seen, but it didn't work any better either. Pedals2People held a free bike tune up for the sixth consecutive year at the West Central Neighbor Day Festival. I left the house early and rode to P2P where I hooked up a trailer and helped haul gear to Cannon Park. (More useless trivia: I learned to swim in Cannon pool back in the 60's. Well, good enough to make it across the pool.)

Bikes showed up. Wrenches were turned. Punctures were patched. Streamers streamed. All but two bikes were returned to service. The extremely-out-of-round wheel was beyond repair. Another bike had so many bent parts about the only thing worth salvaging from it was the adjusting screw on the front derailleur. John Speare made a trip back to P2P and brought the kid a replacement bike. We didn't have as many customers as before, but they all left happy...except...yeah, the guy with the trashed wheel was a bit disappointed. 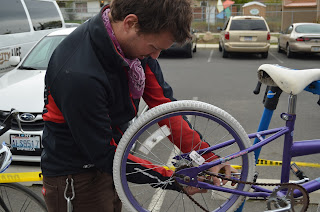 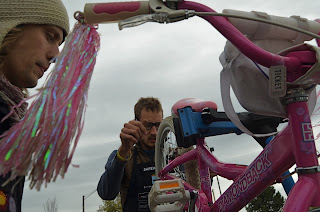 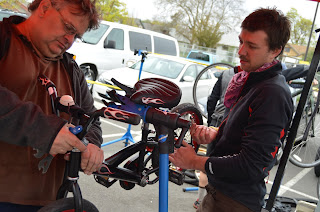 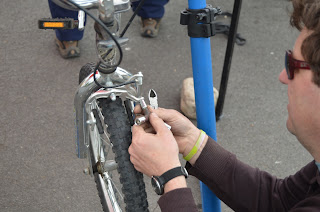 The first Kidical Mass was held at the festival, too. The purpose of Kidical Mass is to teach kids how to ride safely in traffic. Erika Henry demonstrated hand signals and proper distance while riding in single file. Bill Bender, Spokefest founder, lead the 3.4-mile ride and used the stops and turns reinforce what Erika had taught them. Parents and volunteers rode as escorts. It was probably the longest ride those kids had ever completed. And they did great. 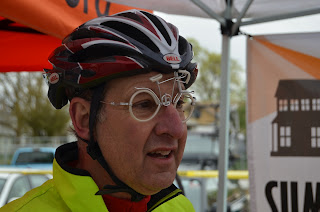 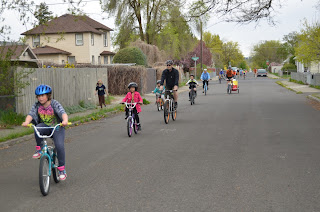 After all the festivities were done, the ride home was great. More so since the wind was blowing so strongly in the direction I was going.
Posted by Hank Greer at 9:06 PM

I did not learn to swim at Cannon Pool.... Sis2 did pick up a case of impetigo, tho. And we both still hate water.

Good job on the bike repairs and the kids' ride.