I saw the police car and three cyclists off in the distance. One rider was bent over his bike much lower than the other two. As the group approached the intersection one of the people in our group yelled, "You're awesome, Hector!" The riders stopped at the light and the guy who was bent over so low sat up and yelled, "Hey!" Although I was expecting to see him, I couldn't help but be taken aback at the sight of a man with no arms riding a bike. 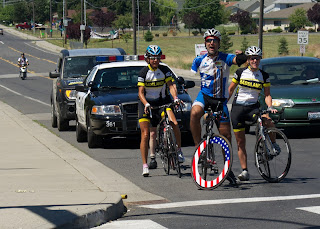 Hector Picard arrived in Spokane around the noon hour today. I and several other cyclists, most of them from the Baddlands Racing Club, met him on South 57th and rode with him to Jameson Davis's house in north Spokane. Hector is a double arm amputee with three Iron Man competitions and a number of triathlons under his belt. The purpose of his cross country trip was to raise money to pay for prosthetics for Jameson. Jameson is 15 months old and he was born without forearms and hands. 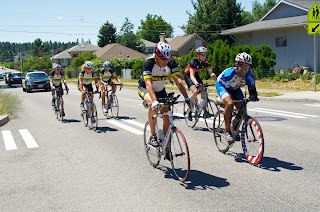 Hector said he connected with Jameson through a teammate who went to school with Jameson's uncle. Brooke, Jameson's mother, has a blog in which she writes about her family and Jameson's special needs. Hector said he read it and was inspired to do something so he decided to ride across the country and raise money to help. 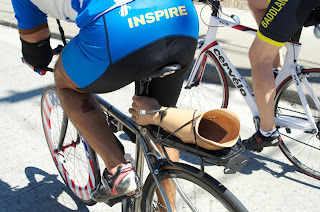 He doesn't normally ride with his prosthetic arm attached to his bike, but he decided to during the ride to help emphasize the significance and purpose of the ride. Hector said he likes to stretch when he stops at red lights. "Everybody looks." He smiles. "They can't help but look. And then they go home and talk about how they saw a man with no arms riding a bike."

As if that wasn't remarkable enough. The man just rode about 3100 miles in 36 days. His bike was stolen before he started so he rode his triathlon bike from Miami to Denver. To shift gears, he would unclip his shoe from the pedal and reach up with his foot to nudge the shifter. Arriving in Denver, he received a new bike courtesy of the I Will Foundation. This bike was better suited for him. He presses his thigh against a lever on the right side to brake. He operates two buttons for electronic shifting up or down the front chain ring with his left knee. He uses the stump of his left arm to press electronic shift buttons for the rear cassette. 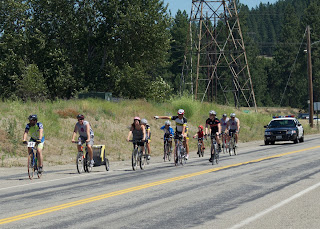 A police escort kept the traffic at bay during our ride through Spokane. Several members of the Davis family met us on Market and we all continued to escort Hector who was thrilled to finally be meeting Jameson. 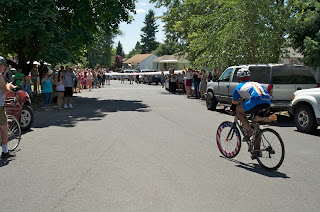 A huge crowd welcomed Hector at the Davis home. TV stations were there, too. Hector met the Davis family for the first time and it was an emotional moment for everyone. Hector spoke about various parts of his trip. There was a fund raiser in Alabama attended by only two families. It was on Father's Day. And yet a 16-year-old young man donated his $500 savings. He saw his first wheat field in Kansas. By the third day in Kansas he was pretty tired of seeing wheat fields. He had five flats on the Sacajawea Historic Byway in Idaho. People all along his route were welcoming and generous.
It's a day like today that makes you remember just how small the small things are.
Posted by Hank Greer at 5:45 PM

I saw that on the news. Inspiring!!