Yesterday was a busy day for me for cycling and photography. I rode to the Negative Split Half Marathon and took pictures along the race. I was racing in the Twilight Criterium in the evening so after riding home I ate a big lunch and took a nap. Isn't that what everybody does to get ready for a bike race?

I decided to drive to the race to conserve energy. Once there, Michael Emde was kind enough to watch over the panniers and rack I took off my bike. I had my cameras, clothes, etc., in them so I could clean up, change and take pictures of the other races.

I was in the first race at 5:00 pm with the Cat 4 and Cat 5 men. Obviously, I'm a Cat 5. It was a crowded field. My plan was to not do worse than last year where I was lapped three times and threatened with a fourth at the end. The first three laps went well and I was encouraged because I was staying with the pack. But then two guys in front of me blew up. In an instant a huge gap opened between me and the group and I was left behind. Still, I thought I was doing well. I stayed on the big chain ring and I was cranking along. I felt I had plenty of gas even though my lungs were busting. But the real racers were cranking even better. I was pulled from the race after being lapped a second time. I think I made it halfway through the 40-minute race. Bummer.

But the evening was not over for me. I cleaned up, changed, put my bike back together, and got the cameras out. Capturing the action on the corners was pretty cool but unnerving. Getting down low with the wide angle lens right on the edge of the road made it look like the riders were going to take me out. It was hard to keep from flinching. But I did start leaning to my right a little.

I have to hand it to the racers. It was incredible to see how fast they were going.

I had both the D7000 and the D50 with me, but I relied mostly on the D7000. It takes pictures so much faster than the D50. But the problem with taking 2,000 pictures at a bike race is it takes a lot more time to process them compared to taking 300 photos with a slower camera, more so since the image files on the faster camera are twice the size. I have 1,000 photos here, and more here, here, and the kids race here. 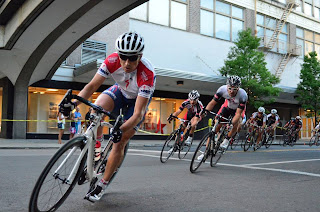 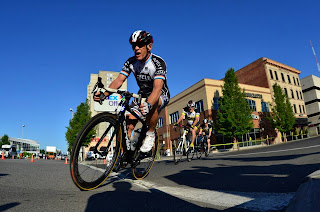 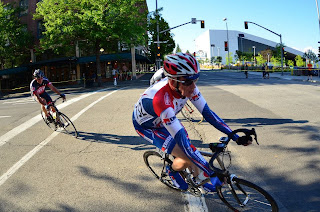 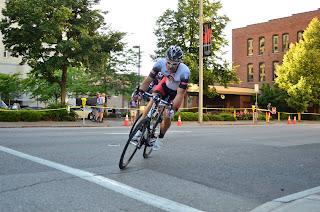 So they kick you out when you lapped 2x ??? Who made that rule? Protest!

Hank, thank you for capturing these moments! I've got the proof, now, of the terror I experienced to show my family! ;)