Careful With That Speech, Eugene

Ken White over at Popehat wrote a cogent article of how our society has been affected by fear mongering, how overreactive we've become, and how acquiescent we are when the state overreaches.

A nineteen-year-old has been jailed since March 27, 2013. He's been beaten — by other inmates, allegedly. He's been subjected to solitary confinement, sometimes stripped naked. The authorities have rejected calls for his release on a reasonable bail his family could possibly afford. All of this has happened because he wrote something online that concerned or offended or enraged the state. 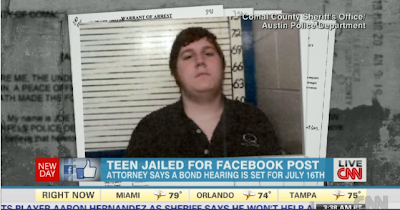 A nineteen-year-old has been in jail for three and one-half months for speech that is obviously not a threat.
Posted by Hank Greer at 1:01 AM