Plenty Of Candidates - A Dearth Of Choices

With last year's legislative redistricting, I was moved to the 7th Legislative District, a district that hasn't elected a Democrat since 1990. It appears the Democrats don't even bother. Consequently, there's nothing but like-minded candidates to choose from for the upcoming primary. The problem is how to differentiate between them. So I checked out their web sites. 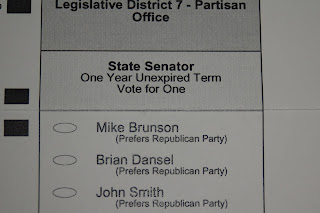 Mike Brunson tours his retired Air Force and Gulf War veteran status. He even posted pictures of his medals and awards. But the background image on his site appears to be the Italian Frecce Tricolori aerobatic demonstration team. I guess the USAF Thunderbirds weren't available. Outside of that, he's all for the 2nd Amendment and 10th Amendment, lower taxes, doing as you please with your property, and loosening the regulations enforced by the EPA.

Brian Dansel is all for old fashioned values and new ideas. "What does that mean?" he asks. Well, he's all for the 2nd Amendment, being pro-life, and lowering taxes. His site's background image appears to be a photos of miners and donkeys. New ideas? Well, he has three of them: teleconferencing, a skill center, and increasing the authority of the Joint Administrative Rules Review Committee. I can honestly say I've never heard of his third new idea.

John Smith is the incumbent but only because he was appointed to the position. Hence the election is being held this fall. His site looks the most post-Web 1.0. I went to the issues page and clicked on The American Dream. I got "This page not found." There are two "The American Dream" links. You have to click the right one. The American Dream and The Economy are the only two issues. He wants to increase the harvest of timber before the trees are decimated by disease and "turns our beautiful mountainsides into deserts." Somehow cutting down the trees before they die prevents this? No mention of the 2nd Amendment but he does have a video in the media section where he talks about gun rights and says he a proud member of the NRA.

Which candidate? For me, not choosing is about the same as choosing.
Posted by Hank Greer at 5:47 AM