Careful What You Ask For

Warmer weather isn't necessarily all it's cracked up to me. I did a three mile barefoot run on the River Walk Monday evening. It was still cool out as evidenced by the bundled up walkers--they were just getting over an Arctic cold snap--but it was pretty nice for me. There were parts of the walkway where the surface was brushed aggregate instead of smooth cement. That got irritating after a while. Yesterday evening it was in the 50's which I thought was great so I went for five miles, half with and half without shoes. The "heat" turned out to be oppressive. I felt like I was wearing a wet blanket. I showed up back at the hotel drenched and dripping with sweat. Funny how that works. 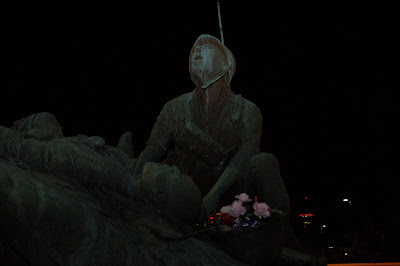 After my run I went for a long sightseeing walk. San Antonio has a very dramatic Vietnam veteran's memorial. It's right next to the Korean War memorial and just a short hop away from the Confederate soldier's memorial. Wars, what would we do without them?
Posted by Hank Greer at 5:57 AM