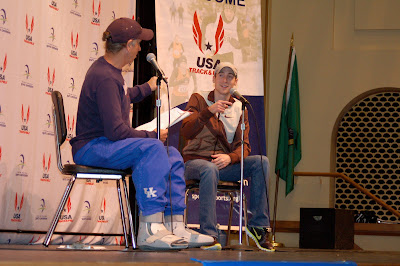 Last night legendary coach Pat Tyson interviewed and bantered with famed distance runner Dathan Ritzenhein at Lewis and Clark High School. He's here for the USATF Cross Country Championship races on Saturday. Josh is a volunteer worker that day. High school runners from North Central, Shadle, University, and even Colville and Deer Park were in attendance. Josh did not meet me at the school. He said the team ran hard--confirmed by Coach Kiesel who was there--during the afternoon training session and he was pretty tired. I also recognized faces of parents and coaches I had passed by many times during cross country meets as we crisscrossed the course to watch our respective runners.

Tyson had "Ritz" talking about what makes him competitive, his training regimen, how he got started running, etc. His thoughts:

He emphasized making it fun like his dad did when he started as a child. If you're injured you tell your coach and you listen to what the coach says to do. An injury is not vacation time. You work hard cross training so you can get back into form quicker when you can run. Go into a race thinking you have worked harder than anyone else there and you're going to win.

Ritz was generous with his time and signed pictures for everyone that wanted one. I picked one up for Josh. He wrote, "Josh, wish you were here." Ouch. Hmmm, I wonder where he got the idea to write that.

During the Q&A, a man asked Ritz what he thought about barefoot running. Ritz explained that there were several drills that are done barefoot on grass, but he thinks that if he ran barefoot on hard surfaces he would probably end up with compound stress fractures. So he's going to wait until he's older before he tries it. Dude, that's like putting off sex until you're older and then looking back on all you missed out on during your younger years. Okay, may be not. But it's close.
Posted by Hank Greer at 5:47 AM

As a former high school cross country runner I genuinely admire Tyson and what he has accomplished, but two questions came to mind when I saw that picture. A) Why the heck is the GU Cross Country country coach wearing his old UK sweats? B) Are the boots on his feet a dastardly side effect of the barefoot running craze sweeping this blog?

I can't answer to the sweats, but I can to the boots he was wearing. When he was at the University of Kentucky four or five years ago a driver ran over both of his feet. He had some corrective surgery last Saturday.