Mariah was there talking to attendees about "Protect Our Future - Yes On Revenue" and handing out talking points and buttons in support of doing more than using cuts to balance the budget. Coincidentally, this morning I read a Think Progress article contrasting the steps some conservative and progressive states are taking. 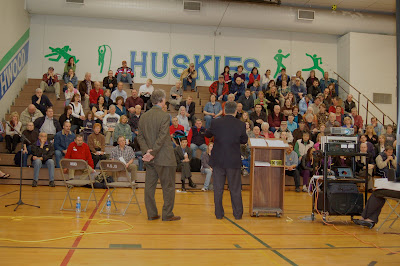 There are over 85,000 registered voters in the 6th legislative district. Barely one hundred people showed up to this meeting. Another meeting was scheduled at 2:00 pm at Hamblen Elementary on the south side of Spokane. I have no idea how many people showed up for that one. 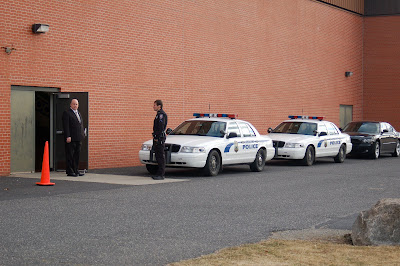 For some reason a noticeable police presence was necessary. During his opening remarks, Representative Driscoll noted that the police were at the building and highlighted the sacrifice the police make as a part of their job but he didn't explain the need for them to be there. 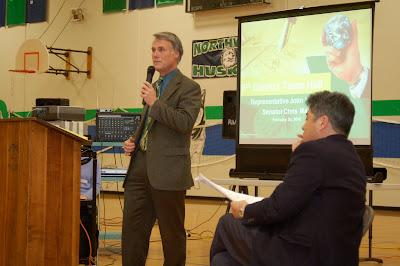 I have never met either of these gentlemen. I was very impressed with Chris Marr. He seemed to have a great depth of knowledge on every issue that came up. He spoke in realistic terms and rarely came across as saying something someone wanted to hear. 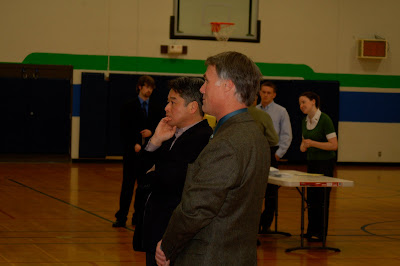 After the Q&A period, both men stuck around so people could ask questions or bring up issues one on one. After the crowd thinned I got to spend a few informative minutes with Chris Marr learning a little about the legislative process. Overall, the meeting was very worthwhile. Everyone was civil. There was a lot of concern expressed about jobs and education.
Posted by Hank Greer at 5:10 PM

I have had the pleasure of lobbying both Marr and Driscoll on behalf of state workers. They are very nice people, and Rep. Driscoll has one of the nicest legislative aides in Olympia.

I am troubled by Marr's refusal to support the measure removing the supermajority to increase revenue. This was an Eyman-sponsored initiative designed to hamstring state government and make them ineffective, which would provide the ammo to further cut budgets and services. We can all see what sticking with a supermajority in the Senate is getting us, and sticking with it in state government is a mistake as well.

Marr's legislative aide sent me an email thanking me for expressing my concern, but that Sen. Marr will not support it because he is focused on creating jobs. How is cutting state jobs (or bringing in furloughs) and removing those incomes from the local economy going to create jobs? It won't. The State of Washington is far and away the largest employer in Spokane county. It is easy for people to think of budget cuts in terms of line items without considering the downstream economic impact of those decisions. Cutting state workers will not create private sector jobs. It will only reduce services to the people of the state and take good, living-wage salaries out of the local economy.

Don't know how I missed this post the first time around, but I very much agree with your synopsis of the meeting, thanks for the report!

The police are certainly deserving of praise and everything, but it was entirely unnecessary to have so many looming around the entrance of the gym.

As a citizen going in to the meeting I felt like "Uh oh, what am I getting in to here?" And then I thought "Surely all these officers can't be here just to guard the town hall, maybe someone got into a car accident?" Overall the meeting was productive and interesting.