Didn't Quite Fix The Problem

Two weeks ago I called the Spokane Street Department about the "Road Closed" sign intruding on the bike lane on Mayfair and the tree branches on North Addison poking into the bike lane. I called yesterday to find out what the status was since there had been nothing done yet.

I was told that a letter was probably sent to the property owner telling them to trim the tree. The man I spoke with had no way of knowing if that had in fact been done. Regardless, I was surprised because I thought the city could do something with the tree if the tree is in the parking strip which it is. So I'll be patient. He also had no way of knowing if or when anything would be done with the "Road Closed" sign.

On the way home today I saw the sign had been moved. 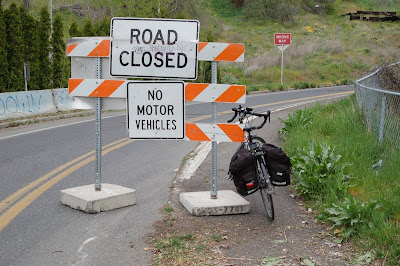 It was moved up the road a bit but it's still intruding on the bike lane. Compare it to where it was before. 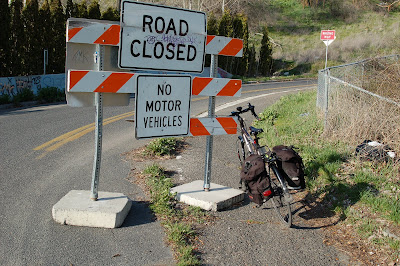 The bike lane is still restricted. There's a difference between having room and having just enough room. Not all bike riders are confident enough to shoot the gap and I see them go around the left side of the sign all the time. The lowest board on the sign is right at handlebar height and the cement base essentially cuts the space in half. Would you feel comfortable pulling a child trailer through that?

I went through a similar discussion with the Street Department last year. And it wasn't a problem until last year. If you look at the Google street view of the sign you'll see how it used to be. The cement base on the right side was on the white line instead of inside the white line.

So I'll be calling them back again, but not until Monday when I get back in town. In the meantime, their number is 232-8800 if any other cyclists don't want to wait for me to get back.
Posted by Hank Greer at 8:23 PM

Why don't you move the damn sign yourself? You could use your bootstraps or something. What would Teddy Roosevelt do?

No no, you don't get it. Progressives complain because they want everyone to do the work for them.

Annoymous, I think it's called "following the rules". The street dept. is there to fix these kinds of problems. If we all start doing the job of the street dept., where does it end? Pretty soon everybody is taking their own trash to the waste-to-energy plant and the refuse techs are out of work.

I don't expect much from them. I asked them to paint a bunch of water valve covers that were not raised with the last paving job to make them more visible in the dark. These are essentially "man-made" potholes that can grab a bike wheel if a rider is unlucky enough to ride through them. The response I got was they couldn't do it because there were no specifications for what paint they could use. I told them to use the same damn paint that the lanes are painted with and of course they ignored me.

I apologize for the late comment moderation. I was away.