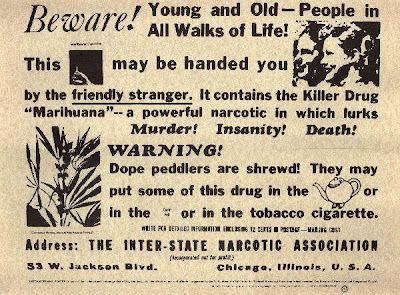 A group called Sensible Washington is seeking 241,153 valid voter signatures to get Initiative 1068, an initiative to legalize marjuana in the State of Washington, put on the ballot in November. I took a look at the text of the initiative and found these proposed changes to the Revised Code of Washington. I bolded the new language.

(d) "Controlled substance" means a drug, substance, or immediate precursor included in Schedules I through V as set forth in federal or state laws, or federal or board rules.

Except as provided in RCW 69.50.401(2)(c), any person found guilty of possession of forty grams or less of marihuana is guilty of a misdemeanor.

Except as provided in RCW 69.50.401(2)(c), any person under eighteen years of age found guilty of possession of forty grams or less of marijuana is guilty of a misdemeanor.

This will also add new sections to Chapter 69.50:

The civil and criminal penalties relating to drug paraphernalia shall not apply to marijuana or marijuana-related offenses committed by persons eighteen years of age or older.

No seizure or forfeiture of property may result from marijuana or marijuana-related offenses committed by persons eighteen years or older.

Captions used in this chapter are not part of the law.

This act may be known and cited as the Marijuana Reform Act.

What does this mean if this becomes law in the State of Washington? Nothing if you're busted by a federal agency. The Supreme Court ruled in Gonzales v. Raich that Congress may ban the use of cannabis even where states approve its use for medicinal purposes. Well, the same holds true even if a state legalizes it.

Things would change at the state, county and local levels. The changes to law enforcement's approach would be significant since marijuana would be legal for anyone 18 or older. But I'm curious about other effects. Will Washington become a gateway for smugglers who want to move their "product" to other states or will the smuggling decrease? Well, that's a federal problem, isn't it? What will happen to the joint task forces? Will the local cops be removed from them? The United States Attorney chooses which cases to prosecute when they're offered up by local prosecutors. The number of plants being grown, size of the operation, the money involved, etc., are possible factors that play into this. What role, if any, will local prosecutors have in this should marijuana become legal? Will recommendations for prosecution at the federal level become "courtesy calls" so the feds can make the bust or will the local authorities focus on more pressing issues? Will there be a challenge to companies testing their employees for marijuana? Why doesn't this initiative address removing the medical marijuana laws since they'd become moot?

If nothing else, making marijuana legal at the state level sends a message to our federal politicians that people want this to change at the federal level, too. Personally, I'm for it.

Sensible Washington has a list of businesses you can go to to sign the petition. (Juvenile humor moment - One of the businesses in Spokane is a law firm with a web site called www.legaljoint.net. Get it? Legal joint. Huh? Legal. Joint. Get it?)

BTW, if you've never seen Reefer Madness, you can check it out for free on the Internet Archive. Hemp for victory!
Posted by Hank Greer at 6:38 PM

Now I see the origin of referring to marijuana as "POT"! (first poster)

Nice catch, Sherry. That one went right by me.