What We Got Here Is...Failure To Communicate

The Inlander has brought in George Nethercutt as a guest conservative voice to their commentary pages. Please go read Mr Nethercutt's first contribution to the Inlander and then come back.

Mr Nethercutt's commentary is essentially self serving. He has a forthcoming book for sale and he has a foundation to help college students.

I want to focus on his address of civics education and his foundation. Mr Nethercutt states the purpose of his foundation is "to help college students receive a better “civics” education, so that they deeply understand America’s great story."

How appropriate that he puts civics within quotes. Mr Nethercutt references the civics survey done by the Intercollegiate Studies Institute. Have a look at the three major findings [#1 #2 #3], along with the additional findings, of the civics knowledge survey and see if you detect a certain slant to the survey questions and their findings.

Here is some of what I take away from it. They have determined what appears to be the danger of a college education.

If two people otherwise share the same basic characteristics, including equal civic knowledge, the one who graduates from college will be more likely than the one who does not graduate from college to:

Similarly, all else being equal, a college graduate will be less likely to:

* Believe anyone can succeed in America with hard work and perseverance;
* Favor teacher-led prayer in public schools; and
* Believe the Bible is the Word of God. 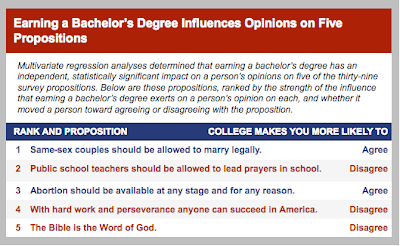 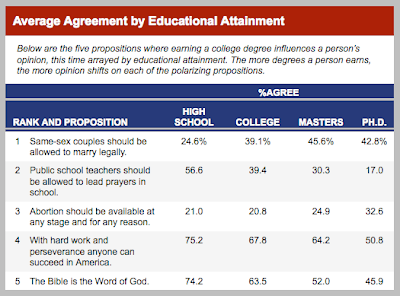 And watch out for those college professors. 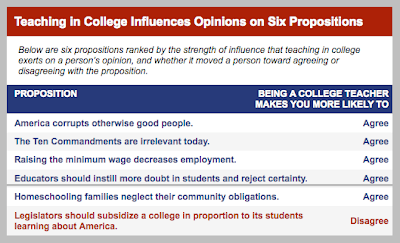 The institute claims a greater knowledge of civics will lead to this: 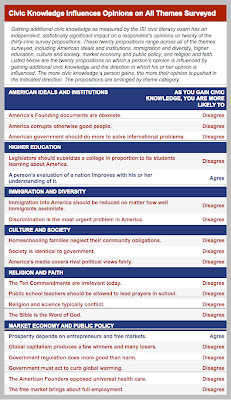 I find it confusing that a college education or a greater civics education will cause you to disagree that the Bible is the Word of God. I guess you just can't win on that one unless you remain uneducated.

Rather than emphasize independent thinking like the institute findings claim a better civics education would lead to, George Nethercutt's message for young people is much like that from the Captain of Road Prison 36. "You're gonna get your mind right. And I mean right."

And your mind will be right once you adhere to Mr Nethercutt's version of "civics".
Posted by Hank Greer at 8:27 AM

My response to the Inlander:

Very unimpressed with this bland stump speech for the Nethercutt Foundation.

Our collective lack of civic knowledge is unfortunate, but it is hardly new news. Can't you find someone to comment in depth on why our educational systems aren't preparing students for full participation in our democratic republic? Someone, say, like Robert Herold who is actually in education professionally and probably has much more thought provoking observations to share on the topic?

I have to admit, this looks like the Inlander is blatanly capitulating to local conservative pressure to have a more "balanced" public voice. While I also take issue with much of Paul Haeder's inflammatory rhetoric, this "out with Paul, in with George" move is pretty blasé. I could have the details wrong on this but the perception is there.

C'mon Inlander. You are supposed to be the Inland Northwest's ALTERNATIVE weekly. Just because the Spokesman is shrinking doesn't mean you have to take over their traditional stance in the marketplace. Grow a spine. Or at least recruit a Republican with some real grit and insight.