Floatin' The River And Defyin' Death

Over the weekend, Chip, my brother-in-law, and his son, Zak, took me and Josh on a float down the South Fork of the Boise River. 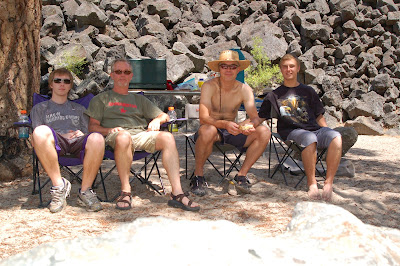 Intrepid river floaters and back country campers:
Josh, me, Chip and Zak. 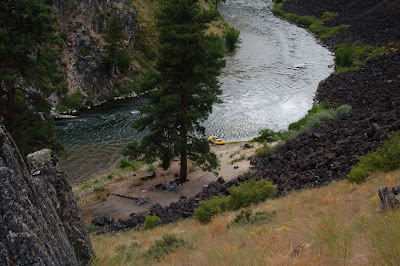 A view of the camp site from higher up in the canyon. 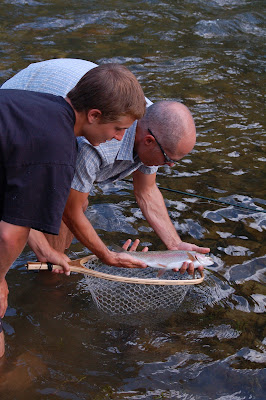 Chip, an avid fly fisherman, caught and released a number of awesome trout. 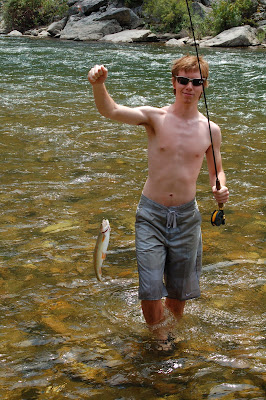 Josh had some fly fishing experience from high school and put it to good use. 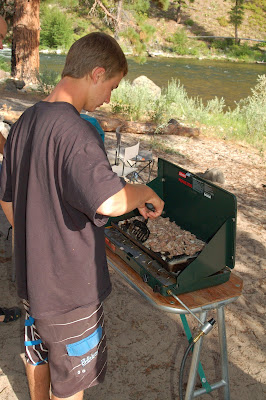 Zak cookin' up fajitas for dinner. 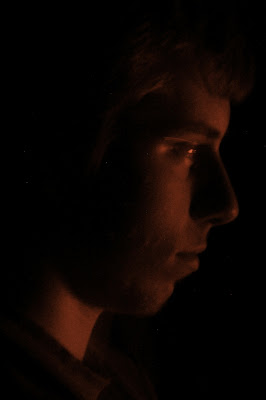 Josh's face in the fire light.
Zak told us of a rock to jump off of on the second day and Josh and I decided to take him up on it. It's close to 30 feet high. Zak led me and Josh up the rock face and onto the ledge. Zak jumped first and didn't die. Josh, second in line, looked back up at me and said, "This is stupid."

"Famous last words," I laughed. Definitely tombstone worthy. Josh stepped off into oblivion and swam back to the raft. Since I'm so blind I needed to wear glasses to make the climb. I couldn't wear them on the jump and I had no other way of bringing them back down so I figured I'd just hold them in my hand. As I stepped out onto the ledge my heart was racing. The water looked a long, long way down. I removed my glasses and took a deep breath.

That's not enough air, I thought as I jumped. The ice cold water was just as shocking and invigorating as the jump was terrifying. I swam back to the raft and climbed in. It was one of those moments where I felt so alive.

Then I tried to put my glasses on.

During my moment of extreme fear I squeezed my prescription sunglasses really, really hard. I bent them back into shape as best as I could but they still sit a little cockeyed. Too funny. 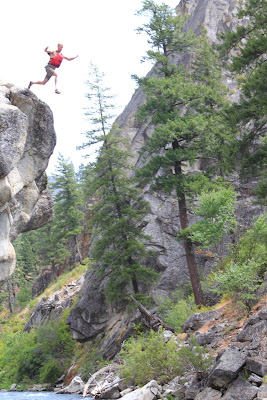 My leap of terror. 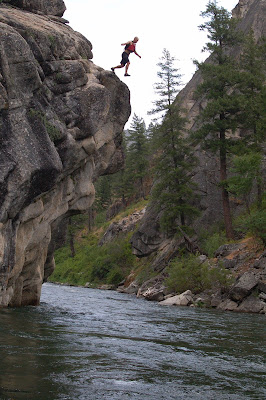 This photo of Chip's jump gives a better idea of the scale.

Good for you making the jump! (I probably wouldn't have done it... might mess up my chicken feathers.) You look like you were mid-stride while running... sort of like what a cartoon character might have done back in the day.