Killing Something Other Than Jobs

During the past few months Republican party concerns about jobs has been mainly concerned with job killing regulation on the part of the government--even though there is no basis for such a claim--and not about doing anything for the unemployed or under employed. The Environment Protection Agency is a favorite target. Our own Cathy McMorris Rodgers repeats the talking point that the EPA is engaged in job crushing measures and to hear her and her fellow Republican congressmen talk, you'd think the EPA and other government agencies were out to creating higher unemployment numbers when, in fact, the opposite is true.

Today I read the letters Paul Dillon exchanged with McMorris Rodgers concerning the FY 2012 Department of Interior, Environment, and Related Agencies Appropriations Act. As Paul points out, the bill eliminates the Office of Smart Growth. But it does many other things as well. McMorris Rodgers does not address any specifics in her reply, stating that protecting our wildlife and the environment "should not come at the expense of grown [sic] and development."

So what else does the bill do? It does not allow the EPA to modify, cancel or suspend a registered pesticide in response to a biological opinion. It denies the funds to implement, administer, or enforce the rule entitled National Emission Standards for Hazardous Air Pollutants From the Portland Cement Manufacturing Industry and Standards of Performance for Portland Cement Plants (PDF).

Funds may not be used to implement, administer, or enforce the rule entitled Water Quality Standards for the State of Florida's Lakes and Flowing Waters. No money for regulating greenhouse gas emissions from new motor vehicles or new motor vehicle engines that are manufactured after model year 2016 to address climate change. New wetlands cannot be created as a result of the flooding in 2011. Funds may not be used to finalize the Proposed Guidance on False or Misleading Pesticide Product Brand Names. The EPA is denied funds to enforce portions of the Clean Air Act. And there is much more. 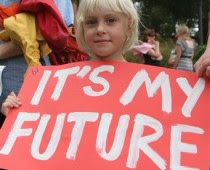 (AP Photo October 30, 2010) Engaging in "job killing regulation" bumper sticker politics is as deep as McMorris Rodgers gets in these matters. The monied interests are more important to her than the health and welfare of her constituents, the land they live on, the air they breath, and the water they drink. The defunding and the explicit "nots" in the legislation leans the "balance" McMorris Rodgers refers away from a clean environment. But she is right on one count. Hindering the enforcement of pollution controls will create more jobs--in health care.

Email ThisBlogThis!Share to TwitterShare to FacebookShare to Pinterest
Labels: environment