I've been thinking about doing two races--my brother John also put a bug in my ear about it--but doing so with the INWCXS schedule means doing them back to back since I can only race in the men's masters and the Cat 4. But if I had a single speed I could do the first race and get 3-1/2 hours to recover before the men's masters. So I asked John and Glen if either of them had a bike I could borrow. 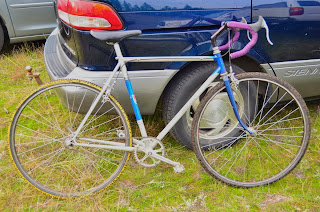 Glen had a bike on hand and very generously tweaked it to fit me. The front chain ring is 42 and the rear is 17, which after some intense thinking and cyphering with a slide rule told me that every time I cranked one revolution the rear cog turned 2-1/2 times. Or pretty close.
Having never ridden a single speed in a cross race before, I have new found respect for single-speeders. Yesterday's course was best described by Joe Anchondo as a power course. Outside of the long dirt/gravel road straightaway, most of the course consisted of technical turns (lots) and bumpy, speed-robbing open field. One section consisted of a downhill through soft, loamy soil leading to a 180-turn taking you back up hill. That hill got harder and harder with each lap on One Greer. Since the course length was shorter than normal we had to do 6 laps. I was standing and cranking hard on the last trip up that hill.

I ate some Clif bars and downed a bottle of chia seeded Gatorade to help get ready for the men's masters race. But the first race took a lot out of me and I was noticeably slower the second time around. Regardless, I felt good considering the circumstances. But I was ready for a nap when it was all over. 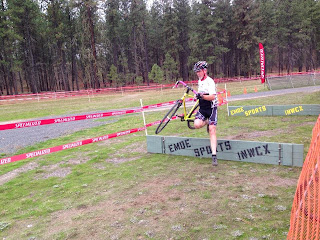 Matt Pollard and Brian Johnson were kind enough to take a couple of pictures of me. (Or maybe they wanted photos of Top Greer, which was undoubtedly the best looking bike out there.) I have to warn you, I am not responsible for any damage to your camera caused by taking my picture. 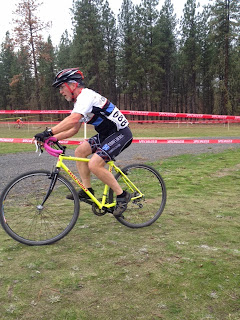 Pictures I took when I wasn't racing are on the INWCXS Facebook page.
Posted by Hank Greer at 4:46 AM

At the masters level is spiking your Gatorade with miralax considered doping?