This was the hardest, most miserable, and worst race I've ever had. Probably because I had the wrong tires on my bike. I've never been to Stanger Farm in Walla Walla before but I knew it was on farmland and based on what I'd seen online in the past I was expecting a wet, if not somewhat muddy course. Instead it was dry, dust-covered well-worn grass and loose dirt.

The course start was a straightaway followed by tons of serpentine turns. Then you went over the barriers and through a barn with a giant fire pit going and bikes hanging all over the place. You crossed a bridge and traveled through loose dirt into another barn with deep straw, then out to a double flyover and returning through the other side of the barn. Coming out of that you dropped into the creek and ran up the other side. More serpentine in the grass and then the triple flyover. You go over, loop around and go through, and then loop around and go under. It's pretty cool. A little more twisting and turning and you're back at the start. The course is short enough to allow seven laps per race.

I was chatting with Todd Conley--a better cyclocross racer and photographer than I--just before my race when he remarked that it was too bad I was never in any of the videos I made. Since he was sticking around for mine I asked if he'd mind shooting with my smartphone. He agreed and I gave him a quick tutorial on my phone and my technique. Turned out it was good he was there more than for shooting video.

My race went badly. I couldn't hold a line in the serpentine stuff on the grass to save my life. My front tire kept sliding out to one side or the other. I went down a couple times, once hitting my brake/shifter and turning it inside. I pounded that out straight while headed to the first barn. After going through the barn, crossing the bridge, and heading towards the second barn in loose dirt, I hit something and pinch flatted my back tire. Crap! I didn't have a spare. I thought I'd go ahead and run to the pit, which was just after the run up coming out of the creek, and then DNF. Todd was waiting there with the camera because he hadn't seen me come through yet. I told him what was up and he volunteered to loan me a rear wheel. He ran to his car and back.

Ohhhh, I have a nine-speed. It'll just have to do. I thanked him and jumped back on the bike. I was far behind and there was no way I was going to catch up with anyone so I suffered alone until the leaders caught up with me. And then I suffered alone after they went by. The rear wheel worked fine for the most part but shifted up a gear on its own every once in a while. Always while going up hill. That's the price you pay for racing cyclocross without a spare, I guess. But I did pick up a dollar on the run  up so it wasn't a complete wash.

After the race I returned Todd's wheel and thanked him again. I haven't looked the the footage he shot (or mine) but he was at all the key places during my race. That was cool of him to do that as well. 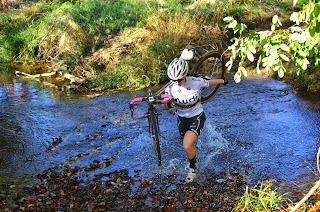 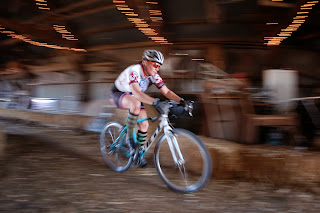 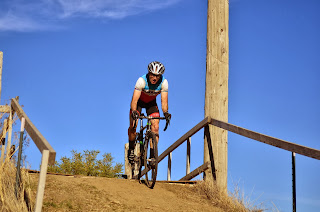 Top of the triple flyover. 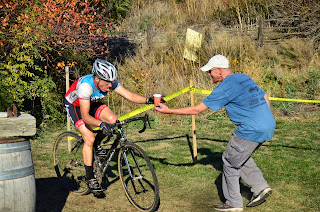 Matt Larson is THE beer hand up man.